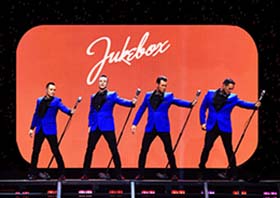 Human Nature, one of the world’s finest pop vocal groups of the modern era and Las Vegas headliners, effortlessly blends retro cool classics with today’s contemporary hits to bring you the ultimate Jukebox party.  Mixing Pop hits with Doo-Wop, Motown, Soul standards and more, Jukebox is a playlist of the foursome’s musical influences and the greatest vocal hits of all time.

Jukebox takes audiences on an unforgettable journey through decades of hits and musical genres.  Starting with the classics of the Doo-Wop era, Human Nature and their 7-piece band and world-class dancers pay tribute to the legends of Pop, Motown and Soul while celebrating some of today’s breakout hits.  There’s even a nostalgic throwback to the Boy Band era with unforgettable Pop hits that’ll have the ladies swooning.  The Jukebox party includes everything from “Under the Boardwalk” to “Uptown Funk” as well as an intimate, up-close and personal “Juke Joint” interactive portion of the show that is not to be missed.  Everyone will be dancing in their seats and singing along to the ultimate playlist LIVE!

Brief History of the Group

Human Nature was formed in 1989 in Australia by Toby Allen, Phil Burton, Michael Tierney and Andrew Tierney. The group started as a doo-wop group called the 4 Trax. They signed with Sony Music and released their first album in 1996 called “Telling Everybody”. Three of their albums afterwards received multi-platinum certification from ARIA. By April 2011 four of Human Nature’s albums had received platinum with a sales record of over 1.6 million records. They also received an award as the Highest Selling Album for Reach Out: The Motown Record. They began residency performance in May 2009 by a Motown-themed show on the Last Vegas Strip. By 2014 they had completed their 1000th residency show.Human Nature asked to cover one of Smokey Robinson’s classic songs and that is how they first met. He was impressed by their audition and allowed them to use his song. He went further to bring them to the states and made them the first Australian group to have their own residency show on The Strip.

Tours by the group

Human Nature music group has gone for both national and international tours. They have toured as Celine Dion’s support act in March 1996 and June 1997 and in 1998. They also got the honors of curtain raising for Michael Jackson on the History World Tour of December 1996 to 1997.

What to expect from the show

There are various things worth looking forward to as you buy your tickets for the show and these performers will not disappoint you. You are guaranteed to get the full value of your money.

The four members of Human Nature will treat their audience to an energetic and highly entertaining performance. The four members will give their fans a show full of charisma, fantastic harmonies and energetic dancing as always. Apart from their classics their new songs will drive the crowd crazy as they work to inject light humour somewhere in between the show. The group has harmonized lyrics no wonder Jukebox at the Venetian has become a Vegas sensation bringing fans back to the historic ages of melodic vocals ruling the airwaves.

Human Nature boasts of being the number one Boy Bank in Australia, thanks to its energetic and dynamic members. The Vegas audience will get the chance to be treated to a complicated choreography blended with jukebox singing. It will be an amazing show for all ages from the youngsters to elderly who can only participate to the performance by toe tapping. The group will get the audience on their feet to teach them a few dance moves that are simple to create a joyous experience as the showroom dances to the same rhythm in synch. Be sure to listen to their own rendition of Bruno Mars and Justin Timberlake songs. The old classics will augur well with the elderly.

Contribution to the playlist

Human Nature fans will be treated to a classic show in Vegas where apart from seeing their favorite pop group they will also get an opportunity to contribute to the shows playlist by choosing their favorite song to be performed by the group. The hits will rock you in your sit. They will range from “Uptown Funk” to “Under the Boardwalk”. Get ready to stomp your feet, snap your fingers and clap your hands and even better learn new dance moves.

Meet your favorite artists in person

Human Nature Show in Vegas will offer you an opportunity to meet your favorite Australian pop group artists. The entire band will be present and at your disposal. You will talk to them and participate in their performances singing to their tunes as much as you like. It will be great fun. You will get to listen to great music hits from this band ranging from wishes, don’t say, Goodbye, Every time You cry, Don’t cry, Eternal Flame, He don’t love you, When you say you love me, Telling Everybody, Counting Down, Reach out, Get Ready and many others.

After the show the four members of Human Nature will get to socialize and interact with their fans on a one on one basis taking photos and signing autographs. For those who have autographs and need them to get signed this will be your chance to see those clothes, caps, albums and books signed for you after a night of entertainment from your favorite pop group.They take their time and enjoy friendly conversations with their esteemed fans and even answering questions.

With each passing day, the impact of music in today's society continues to grow, and there are no signs of stopping this trend. In addition, Vegas has become the center of pop culture and Human Nature could not pass up the opportunity to be a part of it.

It will be no surprise at all to see the Human Nature Group blowing away audiences with their amazing renditions of classic Pop, Motown, Soul and doo-wop hits since the group first opened their residency show in Las Vegas having even impressed Smokey Robinson himself thus earning them the gig. This coming show will be held at the Venetian in Las Vegas.