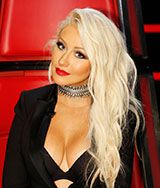 The ever popular Christina Aguilera is taking her tour on a road trip for her first tour since 2008. Her tour titled "Liberation Tour" will feature a lot of her popular hits along with songs from her new albumn "Liberation" This an opportunity in Las Vegas you won't want to miss. Get your tickets early as they will go fast.

Christina Aguilera is a popular American pop singer and songwriter. She was born on 18th
Dec 1980, in New York. Her father is an Ecuadorian while her mother is an
American. Her father was an Army soldier and this is why they moved frequently.
Her parents later divorced when she was young and Aguilera was raised by her
mother. She realized her singing career when she was only 12. This is a talent
she inherited from her mother who was an experienced pianist and violinist.
Christina is popularly known for her distinct voice particularly in her
powerful hit songs like hat a Girl Wants’ and enie in a Bottle.’ Her first
hit song enie in a Bottle’ made her rise to fame in her career. In fact, it
is this song that made her win a Grammy Award for being the leading New Artist
on February 2000.

During her early years, Christina participated in local singing shows and competitions. She won
her first talent show when she was only 8 after performing a song by Whitney
Houston called Wanna Dance with Somebody.’ She later appeared on a singing
competition called Star Search’ but was eliminated in the semi-finals stage.
However, she never lost hope and in 1993, she earned commendable national
attention for being a ouseketeer’ at the New Mickey Mouse Club. She later
moved to Japan with her mother and this is where she recorded her grand song
called ll I Wanna Do’ together with Keizo Nakanishi (a Japanese pop artist.)

Aguilera was nominated to sing a soundtrack called eflection’ for Walt Disney Mulan Film.
She made a major debut in her career during an all-female concert in Lilith
Fair in 1999. This is where she signed a deal with RCA Records. During the same
year, she released a great song that made the highest sales of about 8 million.
The two hits titled hat a Girl Wants’ and Genie in a Bottle’ turned her
career around. Other grand hits that she released include tripped’ and ack
to Basics.’

In her career, Aguilera has stumbled upon several challenges. In fact, at one time she was
arrested due to public intoxication, an issue that sparked lots of critics from
around the world. On 15th June 2018, Christina released her first album in six
years called iberation.’ The song was released via RCA Records. She started
recording the album since 2014.

Aguilera was also announced as the best Latin artist in the world during the World Music
Awards. The bilingual singer is set to perform in Las Vegas 2018 Concert.
Throughout her career, she has proven her vocal abilities and remained one of
the most influential pop artists in the world.

Alongside her career, Christina has engaged in other roles and has worked with AIDS awareness
campaigns. She has also associated herself with Shelter of Greater Pittsburgh
and Women’s Center. She assumed the role of an Ambassador against Hunger in
2010, a program by the World Food Program. This is where she helped victims of
an earthquake in Haiti.

There’s so much anticipation about her Las Vegas performance, particularly from her fans.
However, we believe that Aguilera never fails to wow her audience with her deep
love for music.