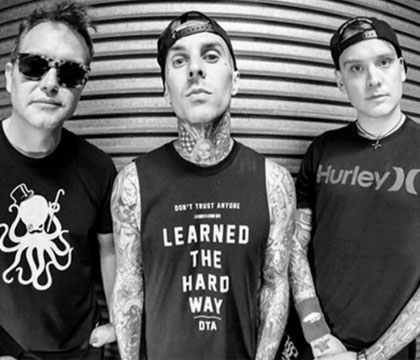 The irreverent pop punks that dominated the radio, television, hearts and minds of rebellious teens everywhere throughout the late 90s and early 2000s are back and better than ever, touring in support of their brand new album, California. The trio is doing a huge tour of North America all summer long and one of the first stops along the way is The Joint at the Hard Rock Hotel & Casino in Las Vegas so if you've ever wanted to see Blink 182 in Vegas well then now's the time!

THE LINEUP
It's hard to believe that so much great music can come from just three people up on stage but Blink 182 has consistently been able to deliver that kind of energy and excitement throughout their careers, whether it's on the records or live and in person. For the first time in their long and storied career they have an official new member that appears on both the album and in the live show but regardless of any minor changes each member brings something utterly unique to the table.

MARK HOPPUS, singer and bassist, Mark is the eternal Peter Pan of the group, always bouncing up and down with a youthful excitement and a sly grin. His tongue in cheek lyrics and school boy charm permeate every Blink 182 song and his energy is infectious when he's playing in front of a live crowd. The bouncy rhythm of his bass on all of Blink 182's songs is unmistakable and will have you jumping up and down in no time. Along with Blink 182 Mark is also bassist and singer for the electronically tinged punk rock supergroup, +44.

TRAVIS BARKER, drummer and all around bad ass. Barker puts the "punk" in the pop punk music of Blink 182 with a machine gun style that you have to see to believe. Barker's head to toe coverage in tattoos is a testament to the commitment he has to his music and his lifestyle and tell a story of all of his musical influences, ranging from punk rock to hip hop. His discography is just as diverse as his drumming as along with his work with Blink 182 he's worked with groups as diverse as the Transplants, +44 and a number of the biggest names in hip hop today.

MATT SKIBA, singer and guitarist, Skiba is the newest addition to Blink 182, replacing longtime co-frontman Tom Delonge. While Skiba may be new to the group he's no stranger to putting out catchy punk music as he's a founding member, guitarist and singer for Alkaline Trio. Skiba's guitar shredding skills and darker voice perfectly complement Blink 182's music and usher in a new side of the band. Along with Blink 182 and Alkaline Trio Skiba has collaborated on a number of other side projects including solo albums and albums withe bands such as the Sekrets and theHELL.

ALBUM
When you see Blink 182 in Vegas it will be in support of their seventh studio album, California. The record marks Blink 182´s first album since 2011´s neighborhoods and their first recorded with new guitarist and co-lead vocalist, Matt Skiba. While definitely breaking new ground and benefiting from Skiba's contribution the album has all of the greatness fans have come to expect from any new Blink 182 record, alternating between angst and laughter from one song to the next. The album features party anthems, introspective pop punk reflections and short, humorous "mini-songs" that last less than a minute. The first lead single "Bored to Death" was released at the end of April of 2016 and rocketed straight to the top of the charts. It's the band's first number one song in over ten years and has been getting play all over radio stations as well as the internet. The other big song off the record that's taken America by storm is the sixteen second snippet, "Built this Pool" which features just one verse on the entire song. Only a band like Blink 182 could pack a fully enjoyable song into a mere sixteen seconds and make you want to play it over and over again on repeat.

OPENING BANDS
There are lots of great supporting acts that are going to be joining Blink 182 in Vegas along with the rest of the tour. The bands all have their own style but share a lot of commonalities and influences from Blink 182.

THE ALL AMERICAN REJECTS, this emo punk band burst on to the scene in 2002 with their hit single "Swing, Swing" from their first album and followed it up with a number of other chart topping successes. Similar to Blink 182, they're able to swing back and forth between feel good punk rock stompers and more downbeat emo songs that are equally as infectious.

A DAY TO REMEMBER, this one of a kind band offers a unique mix of punk, metalcore and good old fashioned rock. With versatile musicians that can switch back and forth as well as mix the different styles along with a vocalist to match.

DJ SPIDER, a master on the turntables that knows how to get people moving, this NY DJ dips into lots of different styles and has worked on a number of different projects. He's just as comfortable sampling jazz as he is electronica and creates a unique soundscape that you're not soon to forget.

THE CONCERT
Blink 182 in Vegas promises to be a not to be missed event. Where a lot of contemporary bands are content to simply reunite and tour for the money and by relying on their old catalogue Blink 182 shows an undying commitment to keep evolving and moving forward by constantly creating and seeking to share their creations with their loyal fan base. Blink 182 are known for they're live shows where not only do they show off their fantastic live music playing abilities but also for the interaction and banter that they have with their fans, making each show different from the last. Never is frontman Mark Hoppus more himself than in a crowd full of people and given the band's penchant for extravagance and their anything goes attitude, Vegas should be the perfect venue for them to cut loose like never before in front of a gigantic crowd. Buy your tickets today and be sure not to miss out on this incredible concert!