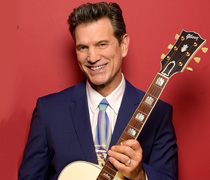 Chris Isaak has been one of the biggest and best names in the music industry for over three decades, and it’s very easy to see why. From songs like “Wicked Game” to “Baby Did a Bad, Bad Thing” and “Somebody’s Crying”, everybody’s got a favorite Chris Isaak song. His outlandish, 50’s style outfits, charming, boyish good looks, and honeyed voice mixed with his hauntingly beautiful melodies will stick with you and make you crave more. The only thing that’s better than putting on a classic Chris Isaak record, is seeing this musical legend perform live. His performances are a once in a lifetime experience that you won’t soon forget. Isaak knows what his fans want to see and hear, and he performs his heart out to give it to them. If you’ve never been to a Chris Isaak show, you have no idea what a mind-blowing, life changing experience you’re missing out on.

Now you can catch a Chris Isaak show live in Las Vegas, Nevada as he tours in conjunction with his critically acclaimed new album, First Comes the Night, when he performs at The Joint at the Hard Rock Hotel & Casino on Saturday, July 20th at 8:00 pm. If you’re a Chris Isaak fan, this is not a show you want to miss out on.

Isaak has developed a reputation as one the best showmen in the business. This isn’t just a concert. This is a performance put on by a master showman. When you go to a Chris Isaak show – especially a Chris Isaak show in Las Vegas – you’re in for a night of all around entertainment by one of hardest working performers that’s ever taken the stage. You’ll get comedy, variety, and of course, the music that you’ve loved for years.

Going to a Chris Isaak show is a lot like going back in time and seeing Elvis or Buddy Holly perform to a throng of adoring fans mixed with a night out with the Rat Pack. Other performers just don’t put on the kind of intimate yet grandiose performance that you’ll experience at a Chris Isaak show. It’s not about pyrotechnics and giant TV screens. It’s not about how many people you can pack into a stadium. It’s about a man dressed in rhinestones, belting out melodies that make your knees weak and your skin shiver. It’s about one of the biggest performers of several generations putting on the show of lifetime. It’s about getting lost in the songs you grew up loving and continue to love today. It’s about experiencing Chris Isaak as you’ve never experienced him before.

First Comes the Night is Isaak’s first collection of original songs in six years. It was recorded in Nashville and Los Angeles and produced on Vanguard Records by Dave Cobb and Paul Worley, the visionary producers behind some of the biggest talents in the music industry today. Cobb and Worley’s other productions include the works of Christ Stapleton, Jason Isbell, Dixie Chicks, and Lady Antebellum. Longtime collaborator, Mark Needham also added his input into the tracks on First Comes the Night to create on of Isaak’s best works to date.

Isaak’s first single from the new album, “Please Don’t Call” has already been met with rave reviews. Chris Isaak performed the song live this year on the popular show, X Factor. At the Chris Isaak show in Las Vegas, fans can hear this new hit, along with other songs from the new album. Don’t worry, he’ll still be playing all of his old classics as well. Isaak knows exactly what his fans want, and he delivers in spades.

You couldn’t pick a better venue than The Joint at the Hard Rock Hotel to watch a Chris Isaak Show. The entire theater has been sound engineered to make sure every seat is the best seat in the house. They’ve got main floor seating for the true rock n’ rollers that want to get as close to the speakers as possible. For the Chris Isaak fan that wants a great view of the stage without the busted eardrums and bruised body from being down in the pits, there’s studio level seating that provides a tremendous vantage point. Even if you’re up in the balcony, the farthest spot from the stage is only 155 feet away. It really doesn’t get any more intimate than The Joint at the Hard Rock Hotel. This venue was designed for music fans, by music fans. If you want some privacy and don’t mind paying for it, there are even luxury suites with personal TVs, comfortable stadium style seating, and a drink service.

Again, Chris Isaak will be performing at The Joint at the Hard Rock Hotel on July 20th at 8:00 pm. You do not want to miss this opportunity to see one of the biggest musical icons in the world. I can still remember the first time I heard “Wicked Game”. The way Isaak’s voice jumps up and down octaves amazed me. I’ve never heard a singer have such control over their own voice. He truly does use it like an instrument. He can also completely shred on his custom, one of a kind Gibson guitar.

Of course, any experienced performer knows that a live show is about more than just playing music, and Chris Isaak has loads of experience as musical performer. This is a professional doing what he does best, not an 8th grader putting on a clarinet recital. Isaak interacts with the crowd in hilarious and oftentimes very deep and meaningful ways.

You will most certainly get your money’s worth at a Chris Isaak show. There’s just no doubt about it. The man has been selling out huge venues for over thirty years with his unforgettable songs and charming personality. Now you get the chance to experience this once in a lifetime performance in the intimate setting provided by The Joint at the Hard Rock Hotel, a venue that many artists describe as their favorite place to play live.

If you’re a true Chris Isaak fan (even if you aren’t) there’s just no way you can miss this show. This is the experience of a lifetime put on by one of the greatest performers to ever take the stage.