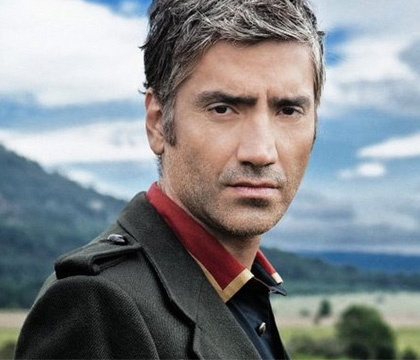 Alejandro Fernández Abarca, also known as El Potrillo, was born on April 24, 1971 in Guadalajara, Jalisco, Mexico. Alejandro's first taste of performing began at one of his father’s, Vicente Fernández, shows where his father joined him stage after he faced a panic attack for forgetting the words to “Alejandra”. His first album, Alejandro Fernández, was released in 1992 under Sony Music. The album brought Alejandro his first tour, which had shows in Mexico and select cities in the United States.

Two years later he released his third album Grandes Éxitos A La Manera De Alejandro Fernández, the album granted him a nomination at the 9th Lo Nuestro Awards for Regional Mexican Male Performer of the Year. His first international hit “Como quien pierde un estrella” was released on his third studio album in 1995. Alejandro’s next album landed him on the Billboard Hot Latin Tracks for seven consecutive weeks with his single “Si Tu Supieras.” After recording his ninth album, Alejandro went on tour in 2002 with his father and recorded a show called “En Vivo: Juntos Por Ultima Vez,” which was seen by thousands of his fans that cumulated in Mexico City at the Foro Sol. In 2004 Alejandro was casted as the lead role in Zapato: El sueño del héroe, a film about the Mexican revolutionary war.

Who is Alejandro Fernandez?

Perhaps the most prominent living Mexican singer, Alejandro is the son of the legendary Vicente Fernandez who was nicknamed 'The King of Ranchera Music’. Alejandro’s first breakthrough on the stage was also through traditional mariachi compositions but later on he went on to conquer the realm of pop music. To date, he has recorded 15 studio albums and six live compilations. Fernandez first made his name in 1995 with 'Como Quien Pierde Una Estrella’, a song that contemplates a sad love story . In 1997, he hit the top of the U.S. Billboard Hot Latin Tracks chart with 'Si Tu Supieras’, which paved the way for his acclaim in North America, later reinforced by his own Star on Hollywood’s Walk of Fame. Another official recognition for his talent are the two Latin Grammy Awards he holds. The prizes are also a tribute to the rediscovery and spread of Mexican music that Alejandro deploys worldwide.

10 Curious Facts about Alejandro Fernandez and His Family

1. Young Alejandro pursued architectural studies but was encouraged to turn to music by his father.

2. Fernandez is rumored to be an expert in horse riding, as well as what is commonly known in Mexico as charreria. These rodeo competitions involving horses or cattle date back to 16th century Spanish traditions which later introduced the sport in Mexico.

3. Alejandro’s oldest brother, Vincente, was the victim of an organized crime group who kidnapped him in the 1990s. According to media sources, one of the his fingers was cut and sent to Vincente Senior, demanding ransom from the family in return for the boy’s release.

4. Alejandro made his first appearance on stage at the age of three when he interpreted "Alejandra" before an audience of ten thousand people.

5. Fernandez has five children, all of which are believed by their father to have a degree of musical talent.

6. In the light of the recent heated coverage of U.S. Immigration Laws, Alejandro Fernandez firmly believes that people should be treated with the respect they deserve regardless of the color of their skin or country of origin.

7. Fernandez has even tried his hand at acting, starring the Mexican Revolution Hero Emiliano Zapata in the eponymous film.

8. Alejandro Fernandez sued Sony Music after they tried to launch an album on the Mexican market with some of his unreleased songs after the termination of his contract with the label. As part of the action, the police confiscated about 6,000 copies of the album from the Sony Music headquarters in Mexico City.

Is Fernandez Considering Recording in English?

There is a number of examples of pop stars like Chakira, Ricky Martin and Enrique Iglesias who have issued albums in English after successful Spanish debuts. This is no problem for Fernandez whose English fluency is at the right level but it is the Mexican singer image that he believes suits him best so he would rather go on singing in Spanish. After all, his publicity campaigns on the territory of the United States are carried out in English but at the same time they are tapping into the potential of the Hispanic boom – a trend followed by several tens of millions of dedicated listeners. In an interview Fernandez gave for the Sun Sentinel 12 years ago, he revealed his strategy towards conquering the American market by pointing out that the United States was extremely important for Mexican music since, as he said, 'the music from Mexico is much more popular here where it thrives’. Apparently, his agenda for reaching out to second- and third-generation Latinos who enjoy Mexican music has met with resounding success even without any projects in English thus far.