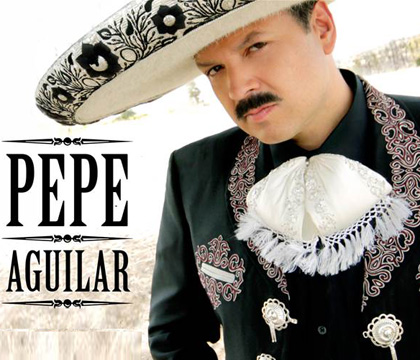 Pepe Aguilar, born Jose Antonio Aguilar, was born on August 7th of 1968 in San Antonio, Texas. He came from a star studded family with having a famous ranchera musician as a father and a well-loved actress as a mother. It’s no surprise that his musical talent was discovered when he was performing at his father’s concerts at age three.

The first step into his musical career began with him starting a rock band named Equus, which produced his first album. Following the disbandment of the band, Pepe began his solo career by blending his traditional music influences with modern pop. Pepe’s songs tribute his native country, Mexico, while showing the pride of his people and country. His debut album Recuérdame Bonito created a name for himself in the Latin music industry.

Throughout his career, Pepe has won four Grammy Awards and four Latin Grammy Awards for his hit singles Por Mujeres Com Tu, Por Una Mujer Bonita and many more. Along with being a successful musician Pepe has also become a successful businessman. He is the owner of multiple fashion lines and has been endorsed for a number of shoe brands. Pepe is also the owner of Equinoccio Records - known for the best labels in Latin America.

He has certainly earned all of his fans, and continues to earn more every day, while at the same time paving the way to stardom for his equally talented children. His music is refreshing, entertaining and engaging, and it only gets better when he performs in any of his concerts.

All about Pepe Aguilar
Pepe Aguilar had fame served to him on a silver platter, as he was born to equally famous parents. His father, Antonio Aguilar, was a hit ranchera musician, while his mother, Flor Silvestre, was a celebrated actress of enigmatic beauty. Pepe Aguilar was born in the United States of America, although his songs are a continued tribute to his native country, Mexico, and a show of pride in his culture and his people.

Pepe’s birth name is Jose Antonio Aguilar. He was born in San Antonio, in the state of Texas, on 7th of August, 1968. The musical prodigy is 48 years old, but in that short span of time, he has won an impressive four Grammy Awards, and another four Latin Grammy Awards. He was awarded the 2474th star on the Hollywood Walk of Fame in 2012. His star was placed next to his father’s. He is arguably the biggest name in the Mexican music industry.

Pepe was born into a large family, and he was blessed with four siblings. Currently, he is married to the beautiful Irene Aguilar, and together, they have four lovely children. The children, Emiliano Aguilar, Aneliz Aguilar, Leonard Aguilar and Angela Aguilar, also possess remarkable musical talent. At very tender ages, the kids have already taken to accompanying their father as he tours the country and performs in concerts. They have in fact, performed on several occasions, much to the delight of their audiences.

Beyond his music, Pepe is also a respected businessman. He owns several fashion lines, and has endorsed a number of shoes. He also owns a record label, Equinoccio Records- one of the best in Latin America. Moreover, he stays true to his word to help develop rural Mexico. Currently, he does so by funding an eco- friendly agricultural project that has seen many lives positively changed.

Pepe Aguilar’s musical journey
Pepe Aguilar’s journey in the music industry has been a long and exacting one. Aguilar first performed when he was only three years old at one of his father’s concerts. His musical talent was evident at that tender an age. Later on in his teens, Pepe would be a staunch lover of rock music. The musical influences for him at this particular time were rock bands such as The Who and Pink Floyd. So great was his love for rock music that he actually formed a rock band which was named Equs, but which was disbanded after a while. The band was however significant to his musical career, since his first album was a product of the band.

As he matured, Pepe substituted his love for rock music with love for Tejano music. He did a great job at blending traditional music influences with modern pop music, and within no time, he was starting to make a name for himself in the Latin music industry.

His debut album, Recuérdame Bonito, was an instant success. Some of his hit songs include Por Mujeres Com Tu and Por Una Mujer Bonita, which won numerous awards and became landmarks in the Latin America music arena.

Pepe Aguilar’s concerts
Pepe Aguilar’s concerts are some of the best music concerts in the world- and they are quite unique for a number of reasons. Pepe Aguilar in Vegas knows how to keep his audience thoroughly entertained. There is no telling how a specific performance will be like, and that element of mystery is part of what makes his concerts a must attend for his fans. One song may have a fast rhythm, and engage the audience in a fast paced dance, while the second may be a slow, sad song detailing the woes of a broken love in words that can move an audience to tears.

Pepe Aguilar specializes in Banda and Ranchera music, just like his father before him. These music genres have general themes of patriotism to Mexico, the joys and labors of rural Mexican life, love and romance. The word Ranchera is in fact derived from the word ranches, which are highly associated with Mexico. Performance of these songs requires quite a number of musical instruments. Prominent among them is a tambourine, a woodwind and other percussion instruments, and you can rest assured that Pepe is never lacking in any of these.

Another interesting aspect of Pepe Aguilar’s concerts is that he lets his children perform. It is a case of history repeating itself, since Aguilar once shared a stage with his own father. Musical talents certainly runs deep in the Aguilar family as Pepe Aguilar’s children have proven. His youngest daughter, who is only twelve, knows how to hold the attention of her audience with her angelic voice and breathtaking performance. She once performed at a concert with her brother- the duo left the masses positively flabbergasted at the extraordinary talent they possess. If only to see this budding talent live, then Pepe Aguilar’s concert in Vegas is a must- attend.

Pepe Aguilar’s concerts attract his fans by the thousands owing to his personality too. He is a lively human being who has not let success and fame stand in the way of interaction with his fans. People are way above excited to encounter their favorite Spanish musician in the flesh, but it is a more pleasant surprise to find out that he is such a humble person. You can look forward to having fun with your music star during his concert in Las Vegas.

Conclusion
Pepe Aguilar is a self- made artist, who has shown true independence by building his own fortune and not depending solely on his father’s popularity to get to where he is now. He has certainly earned all of his fans, and continues to earn more every day, while at the same time paving the way to stardom for his equally talented children. His music is refreshing, entertaining and engaging, and it only gets better when he performs in any of his concerts. Pepe Aguilar in Vegas is a concert that any Ranchera and Banda music fan cannot afford to miss.