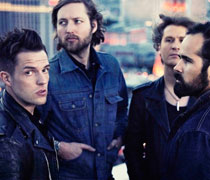 The Killers are considered one of the biggest rock bands of the 21st century,and the most successful act to ever emerge from Nevada, selling more than 28 million records worldwide, including 10.8 million in the US alone. They have performed in over 50 countries and on six continents

The Killers and their beginnings:

The Killers can be accredited with being one of the best rock bands along with being one of the most celebrated too. They have an elegant manner for portraying their image supporting it with brilliant music. They came together in 2001 in Las Vegas, Nevada as Brandon Flowers (lead vocals and keyboard) came together with Dave Keuning (guitar and backing vocals). They later found their remaining band members and once the band was formed completely in 2002, they have been performing together ever since. Their name is derived from a fictional band name which appears on the bass drum of the band in the music video of “Crystal” which is a song by New Order. The band’s member Brandon Flowers was inspired by Oasis and their music at the time he came together with Dave Keuning.

Work and achievements of the Killers:

The Killers have released 4 studio albums and each one of them has created a tumult in the music charts’ and best music lists’ as the albums made their way to the top. Their first album Hot Fuss hit the stands on 7th June 2004 and brought with it singles like “Somebody Told Me” and “Smile Like You Mean It”. The first signs of progress was seen by the band when their song “Mr. Brightside” was premiered by DJ Zane Lowe on the BBC Radio 1 on 19th August 2003. The Killers’ second album named Sam’s Town gained mixed reviews from the critics and people saw a new face and art from the Killers. The Rolling Stone gave a negative review to the album but good music triumphed as their album reached at second position on the Billboard chart and gained the top position on UK chart with over 706,000 copies being sold worldwide.
Their third album called Day & Age ratified their claims at being one of the best rock bands and gave people a new tune which they would remember for years in the form of “Human”. The band was also invited by Barack Obama following their success and they were presented with the wonderful opportunity to play in the White House for the second annual “Salute To The Military”. Their latest album “Battle Born” came after the band returned to stage from a one and a half year break. This album was their 4th album to top the UK charts in a consecutive manner. They have been giving the world amazing music and have received numerous awards and accolades in the field of music. They have also released a number of mixtape albums along with their recent album Direct Hits which consists of the greatest hits given by the band in their musical journey.

Feel their music with live performance:

Watching a rock band perform live is one of the happiest feelings ever. While rock music is often enjoyed with people it also brings forth a range of emotions and connects the listener to the band on a personal and emotional level. Of the many artists who walk the path of music, only a handful few have the charisma and skills to be at par with the Killers. Their moving music revolves around the variety of human emotions and dilemmas which people face on a daily or general basis. The Killers have a brilliant act for the crowd each time they touch the stage. Their performances often get thousands of views online later and most of their concerts are a hit. Their largest performance at Wembley Stadium was on 22nd June 2013 where the band greeted a crowd of 90,000 people and the Killers Las Vegas will be an unforgettable event of similar magnitude.

The Killers know their way with the audience and provide the best music for their fans. They have worked with many people for over a decade and are now well set and honed to perform at any location. Watching them perform live is nothing short of a treat for anyone who has listened to their music.

When, what, where and how much does it cost?

The Killers will be returning to their wonderful hometown of Las Vegas to perform live on 6th April 2016. The event will be conducted at the T-Mobile Arena located at 3780 Las Vegas Blvd. South. The Killers Las Vegas show starts at 8:00 p.m. but you can rush in and take your favorite spot as soon as the gates open at 6:30 p.m.

They will be performing live with special guests Wayne Newton and Shamir who are both quite renowned. The tickets are available for sale on websites since 12th December 2015, 10:00 a.m. PST. The tickets range so check out vegastickets.com for pricing.

Their latest album Battle Born is named after the words on the Nevada state flag along with sharing the name with the recording studio of the band. This album has been long expected and anticipated by the fans since their announcement of break in 2010. As apparent, their music now consists of everything which the fans want and everything which defines them as the pioneers in their genre. Their stage acts consist of a wide range of songs and tells people about the development of the band along with their wide approach. Be ready to swing with each tune during the Killers Las Vegas concert with their ever improved rock music which has heavier guitars, powerful drums and epic vocals. Basically a perfect recipe for every rock music fan.