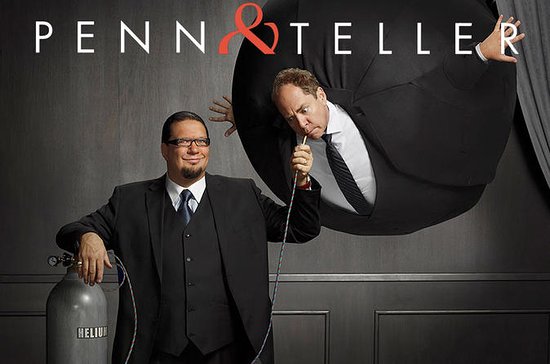 Taking a Closer Look at the Guys behind the Shows

While Penn and Teller are most notably known for their collaborative in-depth illusions and antics on stage and screen, both had careers dating back long before being introduced to one another by mutual friend and initial performing partner, Weir Chrisemer. Each dabbled in magic early on though on a much smaller scale than the one they’re famous for today.

Penn, the more sizable and vocal member of the duo, developed avid juggling skills following high school, ultimately graduating from the Ringling Bros and Barnum & Bailey Clown College. His early inspiration was drawn from illusionist James Randi who approached the arena from a non-traditional, less mystical perspective than most. Penn is also an accomplished musician, writer, producer, director and actor to name a few talents.

Teller may be the silent partner in the act, but his miming skills, body language and facial expressions speak volumes. He graduated from Amherst College with a Bachelor of Arts in Classics and became a high school Latin teacher. Before breaking into big-time showbiz, he performed soundless, solo magic acts at frat parties. Despite being largely hushed during shows, Teller is also quite a proficient voice actor. He’s a gifted director, producer and writer as well.

Penn and Teller: from Small-Scale Crowds to the Latest Las Vegas Run

During the latter half of the 1970s, a number of historic events took place. Some were uplifting whereas others sparked adversity. Of course, the impact of certain ones wouldn’t fully be felt for years to come. Saigon fell, bringing an end to the controversial Vietnam War. Jimmy Hoffa executed his infamous disappearing act, and Microsoft and Apple both emerged to kickstart a then-embryonic market.

On the entertainment front, evolution was also taking place. Saturday Night Live and The Muppet Show were launched. Elvis went on to perform beyond the Earthly realm. Star Wars and Roots premiered. In the midst of it all, two fellows named Penn Jillette and Raymond Teller were brought together. 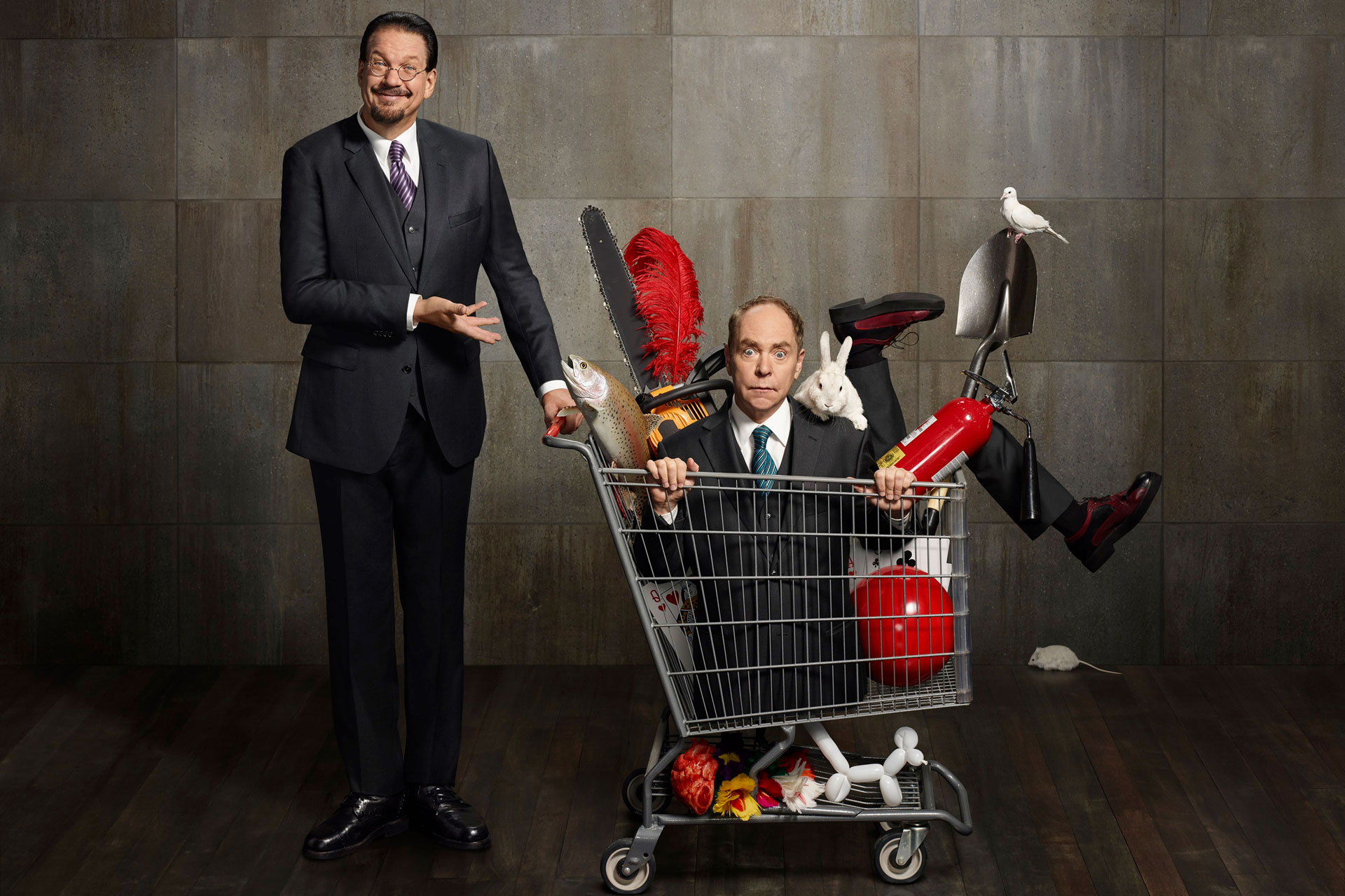 Since debuting on stage, these magicians, illusionists, comedians and all-around entertainers have managed to hold the world spellbound and even leave more than a few people somewhat disillusioned. Either way, their incredible and unique act has changed the course of Broadway, television, radio, the big screen and numerous other venues.

With the unveiling of the latest Penn and Teller Las Vegas show, the duo is sure to carry on a decades-long tradition of engrossing and astonishing audiences from its self-named theater at the Rio.

Going Back to the Beginning for Penn and Teller

Penn and Teller’s on-stage presence started off with a third man. Known as The Asparagus Valley Cultural Society, the group began to develop many of the elements millions recognize and love about their show today. Even then, the world-renowned duo brought laughter and gasps to the act. When the third member split from the group in the early 1980s, Penn and Teller kept the act going and branched out in a number of ways.

Within a few short years, the pair had gained national acclaim for their off-Broadway show. In 1985, they aired their own television special on PBS deemed Penn & Teller Go Public. This performance earned not only unprecedented applause but an Emmy to boot. By 1987, they had taken Broadway by storm and were well on the way to their ongoing Vegas show, which currently exhibits no sign of disappearing any time soon.

Outside the Vegas Theater

Although Penn and Teller have made history as the longest-running show in a single Vegas theater, their stint in the public eye spans well beyond the Rio All-Suites Hotel and Casino. Following initial success as a trio act and via their PBS Special, the team became a high-demand item on the talk and variety show circuits. Appearances in this sector include:

Aside from turning up on numerous well-known shows, the internationally known team has also made a name for itself through series of its own creation.

In yet another of the pair’s shows, their skepticism helps debunk certain industries, practices and purveyors of such, shedding light on which ones may be pure bologna. Mingled amongst all these appearances, Penn and Teller have guest starred on a wide range of television shows over the years, such as:

These are only a few of the small-screen scenarios in which the team have popped up; no doubt, they’ll continue to be seen in countless others as time goes on. Of course, they’ve graced the big screen as well on more than one occasion. In addition to those claims to fame, Penn and Teller have each written a long list of books on their own and co-authored a few titles, like:

Music video appearances likewise make the cut, including Run DMC’s “It’s Tricky” and Katy Perry’s “Waking up in Vegas”. All along the way, documentaries, radio ventures, contributions to various causes and even a video game production enter the mix. With numerous successful tours both nationally and abroad, as well as too many other endeavors to name, Penn and Teller have risen through the ranks to become a couple of the most widely recognized entertainers across the globe.

Add to those accolades the near-endless lineup of awards and titles they’ve gained over the years, and the twosome has built quite an impressive resume. They’ve even made headlines outside the showbiz sector by striking up a great deal of debate over their religious and political views.

No one can deny the amity and harmony Penn and Teller have on stage whether they’re performing illusionary wonders or bringing down long-running myths. Many question whether they’re as close off the stage as they seem to be before a crowd. Both have noted in various interviews over the years they rarely spend time together outside professional confines.

Having said that, both also point out they’re “the best of friends”. Their lack of purely social interaction isn’t a product of animosity; it’s merely how their schedules tend to run when they’re not performing. They maintain a mutual friendship and respect both feel is vital to their artistry. Though they admittedly argue over certain aspects of their shows, both believe these differences only serve to strengthen their performances.

Penn and Teller have created a legend spanning more than four decades. For half that time, they’ve been a Vegas staple. Their inaugural show took place at Bally’s in the Celebrity Room where other top billings have included Barry Manilow, Dean Martin, B. B. King and the Carpenters among numerous others.

From there, the two transitioned to the Hollywood Theatre at the MGM Grand Hotel and Casino. In 2001, they began headlining at the Penn & Teller Theater at the Rio, the venue their Vegas show calls home to this day. Performing for some 1,200 fans per night, they remain a top-selling act and perhaps the most unique to ever grace the Strip.

You might say the pair’s act has run the gamut of traditional magic tricks over the years; of course, their performances are anything but conventional. With this duo’s unique spin at work, even the most seemingly mundane concept takes on an entirely new form. Smoke and mirrors and slight of hand barely scratch the surface of what you might see at Penn and Teller’s Vegas show.

One occasional element of their shows actually dates back to their early years of performing in tandem. In this skit, Teller manages to thoroughly prune a rose while touching nothing but its shadow. In the end, an unfortunate mishap casts an astounding phantom shadow of its own.

Yet another illusion offered up by the dynamic duo involves Teller disappearing into a helium-filled trash bag. Following a brief flash of light, he reappears on stage with the bag still intact and inflated.

In one routine, an audience member wearing glasses is called to the stage. His or her eyewear mysteriously disappears at the touch of a wand only to reappear on Teller whose head is encased in cement.

Of course, Penn and Teller are known for, among many elements, a certain amount of gore in their presentations. Tickets to their Vegas show might grant you firsthand access to needle swallowing, rogue nail gun fire, graphic dismemberment and numerous other potentially grisly scenes. In spite of certain ghastly sights, you’re bound to see a great deal of beauty and grace as well.

In-depth details of their most recent Las Vegas stretch are a bit difficult to come by, but some of their classics are bound to make their way into the mix. From disappearing objects and people to levitation and falling fridges, you never know what to expect from magic’s most mystifying and off-beat pair.

Every new act or television show with Penn and Teller’s names in the credits promises to bring onlookers something innovative and exceptional to enjoy. Excitement over what’s to come mounts until the latest spectacle is finally unveiled. This year’s Penn and Teller Las Vegas show, though, almost met with an untimely ill fate.

Earlier this year, Teller was forced to walk away from the stage for spinal fusion surgery. As word of this procedure spread, so did rumors of the team’s retirement. Fans’ concerns and disappointment quickly gave way to relief and delight when, less than two months after Teller going under the knife, the pair resumed its Vegas performances.

Looking to the Future

Penn and Teller have no intentions of stepping out of the spotlight any time soon. They’re already back up, running and ready to be fooled with their much-celebrated television show, Penn and Teller: Fool Us. At the same time, future talk show dates have also been set. As far as their Vegas plans go, the twosome recently announced a three-year extension of their show at the Rio.

According to recent interviews, their performances will be taking a few new turns during the months and years to come. Just what those deviations will entail remains to be seen. Regardless, they’re sure to continue eliciting gasps, guffaws and great reviews from audiences around the world.

In the Grand Scheme of Things

From small-scale fairs and street performances to Broadway, the big screen and beyond, Penn and Teller have built a unique and admired presence over the last four decades. This year marked their twenty-fifth anniversary in Vegas. Though medical concerns threatened to bring a halt to their progression, nothing can truly stifle this mind-blowing pair.

While this particular dynamic duo struck a nerve with other magicians by explaining the finer points of some of their tricks, full disclosure certainly didn’t take any of the enchantment out of their act. They continue to draw sold-out Vegas crowds in a time when shows on the strip are threatening to die out. Critics and fans alike agree their perpetual popularity lies in their extraordinary ability to stand out in a sea of monotony.

Tickets to Penn and Teller’s upcoming Las Vegas shows are still available, and new dates are continually being added to the roster. Don’t miss out on the humor, amazement and even bloodletting of the duo’s classic routines as well as the next surprises sure to make their way onto the stage.