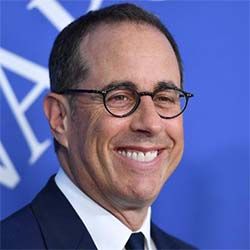 Nearly 15 years after his long-running television series "Seinfeld" left the air, comedian Jerry Seinfeld is in the midst of a long-running comedy tour, which includes an extended stint at Caesar's Palace in Las Vegas. He's back on stage with a new hunk of material and stories about some of the weird show business meetings he's had in recent years. It's a hilarious and inventive 90 minutes of stand-up comedy and while other comics have done well with observational humor, no one does it better than Jerry Seinfeld. And if you're planning on going to the show, here are a few things you should know....

There Is An Opening Act

While it's common for music concert acts to have an opening act that's a comedian, most star comics opt to have a musician open for them. They're most often worried that their opening act will do too well, but Seinfeld is apparently comfortable enough not to worry about the competition. His opening act in Las Vegas is well-known comedian Larry Davis, who opens the show with a 15-minute set before introducing Jerry Seinfeld. The two comics have very similar styles and are a good fit for the night.

Seinfeld Is A Las Vegas Veteran

Jerry Seinfeld has been performing in Las Vegas since the mid-1990s and has been headlining the big room at Caesar's Place since 2006. He's familiar and comfortable with the venue and with the challenges of performing in front of a crowd that may not be that familiar with him. And that's one of the peculiar things about the crowds at his Las Vegas shows. Despite his fame and the success of his television show, an amazing percentage of the audience doesn't seem to be all that familiar with his stand-up. Which makes for an interesting mix, given the crowd will also include some people who know every one of his lines from the TV show by heart. That mix of audience members is especially noticeable during the question-and-answer portion of the show (more on that later).

All Of The Material Is New

Even if you're a huge Jerry Seinfeld fan, 99.9% of the material you'll hear at the show will be new. Before embarking on his current tour, Seinfeld spent a number of years developing new material in smaller clubs and in front of corporate audiences. He doesn't believe in doing cable TV comedy specials, so the only way fans will hear these jokes are by attending one of the shows. And since he's already developed the material, the show won't be weighed down with jokes that are still being worked on in front of a live audience. That having been said, Seinfeld is still working on new jokes and he does sprinkle those into each show. He also occasionally revisits one of his classic stand-up comedy bits, although even then he has reworked the material to make it seem fresh and new-ish. While it does take Seinfeld several years to change over and update his complete act, unless you've just recently seen one of his shows, you'll find nearly all of it new to you.

The Show Is Family Friendly

While the concerts aren't targeted for teens, you won't hear anything in a typical Jerry Seinfeld concert that will make you cringe. Seinfeld has never been much for "adult" humor and if you've watched him on television, you pretty much know what to expect. He'll talk about marriage, kids and other facts of everyday life. He tells audiences that despite his success and money, his day-to-day is pretty typical. While it's hard to completely believe that, the subject matter for his material is very mainstream and middle class. Because he's an "observational" comic, most of his material is based on things he's seen or the small minutiae of life. There's also not a lot of swearing or talk about bodily functions. If this concert was a movie, it would probably be rated PG-13.

While it doesn't come out very often in his act, it's tough for the comedian to completely ignore the fact that he is rich. Very rich. He's estimated to have made at least $500 million from his "Seinfeld" television show and when he talks about his fancy sports cars, it's apparent that he has more money than he knows what to do with. But overall, he still manages to remain as down to Earth as anyone can be who is a rich, successful celebrity. And keep in mind that the primary reason that he's rich is because he's very, very funny.

You Can Ask Questions

Every concert ends with an extended question-and-answer session with the audience. Granted, in a 4,000 or so seat arena like the one at Caesar's Palace, most people aren't going to be able to ask Jerry Seinfeld a question. But he does answer a number of them and is pretty quick on his feet. The downside is that audience members tend to ask the same questions at every show, such as "Where's Kramer?" But Seinfeld isn't afraid to answer the difficult questions and sometimes he'll provide some real insight into what it's like to be a superstar comedian. He is especially funny when talking about some of the pitches he's heard from people in Hollywood hoping to get him to do another television show.

It's Worth Every Penny

If you've ever attended a show by a big-name comedian, you already know that in many cases, watching their act feels a bit as if the performer is just punching a clock. They come in, do their jokes and leave and despite the laughs, they don't seem to be having all that much fun. Jerry Seinfeld is different and maybe it's because he's wealthy enough that he doesn't need to work. He's doing stand-up because he can't imagine doing anything else with his life and his pleasure at that extends to his concert shows. He's having a great time and doesn't seem to be jaded at all by the fact that he's done hundreds of these shows already. Jerry Seinfeld is having a great time and that ensures that the audience will enjoy themselves just as much.