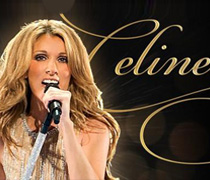 Celine Dion redefines class and elegance in onstage performances with her magnificent voice. Her masterpiece classical songs will be show you don't want to miss. The new orchestra will surely rock the show like never done before. It is going to be mixes of timeless Hollywood classics as usual with a touch of all Celine Songs that her die-hard fans would like to hear her deliver live with her angelic voice here in Vegas. Only a handful of singers have achieved the level of global stardom as Celine Dion. She has achieved great success in both the Francophone and Anglophone world managing to sell over 175 million albums all over the world which makes her one of the best selling artists of all time.

Celine Dion the Canadian recording artist is set to perform in Las Vegas in May 2016 in another round of her residency show. The show that first show cased in 2011, at The Colosseum at Caesars Palace in Las Vegas, Nevada has over 70 performances per year making Celine Dion to be the top earning artist in Las Vegas pocketing over $476,000 per show. In 2011 this show ranked 26 position in Pollstar’s “Top 50 Worldwide Tour” earning Celine Dion way over 20 million U.S. dollars. In that same year the Residency show was the number one show in North America being watched by over 200,000 people.

Celine Dion is one of the most immediately recognized, greatly respected successful performers in the history of pop music. In her successful 30 year career she has managed to sell over approximately 250 million of her own albums. She also managed to bag five Grammy Awards, Seven American Music Awards, two Academy Awards, 20 Juno Awards in Canada and amazingly 40 Felix Awards from Quebec. In 2004 she also received the Diamond Award at The World Music Awards and in 2007 she received the Legend Award at World Music Awards for her global success and contribution to the music industry.

According to the end of year data for Pollstar, Celine Residency show was estimated to have earned a gross of $116.5 million while playing to an audience of 726,346 people in North America.

According to Rene Angelil’s announcement in 2013, Celine Dion had decided to extend her residency contract to 2019. However, on 13 August 2014 Celine and Caesars cancelled all the planned shows up to March 2015 due to Celine’s husband, Rene Angelil’s battle with cancer of the throat.

Celine Dion resumed her residency on 27 August 2015 with new theatrical and musical elements. She was to return to the Colosseum with a majority of new band members. Her management made this move with an aim of giving Dion a new look and feel. This move would see most of the long serving Celine Dion’s musical crew and touring musicians being no longer a part of her team. So as we look forward to her Las Vegas show to come the following crew members will not be available:

Celine recently cancelled the rest of her performances scheduled for January due to her husband’s recent demise from cancer. She however resumed the Residency on February 23rd of 2016 to find a sold-out crowd and rave reviews. Celine is set to resume the residency on May 17.

All about the Residency at Caesars Palace

The following happenings highlight Celine Dion’s schedules and activities within the residency as from 2013 to the current year of 2016. The schedule will give you a tip of an iceberg with regards to what has happened in the recent residency shows.

September 03, 2013- Celine Dion’s New Studio Album was made available in the United States

March 25, 2015- Celine announced her return to the Colosseum at Caesars Palace.

June 26, 2015- Celine Dion’s fans had an opportunity to be part of her show at the Colosseum at Caesars Palace. Fans got the opportunity to choose their favorite songs and hear Celine sing them out to the audience.

October 05, 2015- Celine Dion decided to add new 2016 performances to her Celine Residency at the Colosseum at Caesars Palace.

January 14, 2016- Celine Dion decided to cancel her scheduled performances for Saturday January 16 and Sunday, January 17 due to her husband’s death as a result of battling cancer.

February 23, 2016- Celine Dion made an emotional grand return to the Colosseum at Caesars Palace. This was on Tuesday 23 of February.

Fan base and what to expect

Celine Dion has one of the largest and most adoring fan bases in the music industry due to her talent. She always puts up breathtaking performance at her shows with venues that are always packed to capacity with excited fans. For a music icon like Celine Dion coming to a venue near you would not therefore want to miss out. This is going to be a show of glamour directed by Grammy Awards producer Ken Ehrlichi and presented by AEG Live together with Caesars Entertainment. The show will feature a full orchestra and Celine’s band with a visually stunning presentation specifically designed for the 4300 seat state of the art venue in Colosseum. Celine Dion will also make an appearance at the Colosseum stage with a new and incredible wardrobe consisting of exclusive designs which are developed by her stylist in collaboration with other design and clothe lines such as Mugler, Elie Saab, Atelier Versace, and Schiaparelli.

All Celine Dion’s shows are scheduled for 7:30 pm and you should not miss.

As most people will agree, Celine Dion is no ordinary star. Her talent has propelled her to unimaginable heights and with each passing day, the star continues to be bigger and bigger, regardless of time and age. Her Las Vegas show is a true testament to how loved and musically talented she is. This is mainly because, despite being in the Las Vegas area, people from all over the world flock her shows to get a glimpse of the star and hear her perform. This is something that can only be attributed to a few stars.