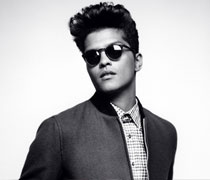 With a combination of his catchy music, numerous awards, and retro-style performances, Bruno Mars has been dubbed as one of the “greatest-selling artists of all time.”  Mars started his musical career at the age of 3, where he learned a variety of musical techniques performing as an Elvis impersonator in Hawaii. When he moved to L.A., he faced issues such as poverty and image rebranding. Eventually, he started writing songs for artists like Adam Levine and Flo Rida. He gained notoriety after being featured on B.O.B’s “Nothin’ on You” and Travie McCoy’s “Billionaire.” In 2010, he released his debut album Doo-Wops & Hooligans. The lead single, “Just The Way You Are,” reached #1 on the Billboard Charts and still holds the title as the “longest reigning debut adult contemporary formal hit.”  All of the singles on the album reached the Top 5 on the charts. In 2011, he received his first Grammy for Best Male Pop Vocal Performance, and many other awards as well. His second and third albums, Locked Out of Heaven and 24K Magic, both debuted in the Top 2, with all of its singles reaching the top-three. Mars has also received critical acclaim from his 2 Super Bowl Halftime performances, which have both become two of the most watched acts in Super Bowl history. His shows feature his band called The Hooligans, who serve as both musicians and backup dancers. Those who watch his shows are met with his smooth vocals, powerful dance moves, and engaging charisma that could encapsulate anyone.

• The start of the music career
Amazingly, he used to perform about four nights in a week when he was five, as a part of the family's band called The Love Notes. One thing that caught the attention of many people was when Mars impersonated Elvis Presley. Nonetheless, he was overly obsessed with Jimi Hendrix. This pushed him to start playing the guitar and write songs, and it is there where his popularity sprung. He later on moved to LA after graduating from high school. In 2004, he signed with Motown Records, though he didn’t make it to the spotlight yet.

• The collaborations
Mars tried to make it on his own as a solo artist but found it overly challenging. He later on met with Phillip Lawrence, and they partnered to form The Smeezingtons, a production team. They also included Avi Levine, and they produced songs for the likes of Sean Kingston, The Sugababes, and Travie McCoy. Things changed when the Smeezingtons produced and wrote Nothin’ On You by B.O.B. Mars grabbed the attention of many when he sang the hook. After that, he released his debut hit, It’s Better If You Don’t Understand. Since then, he has been one of the top pop artists around the world.

• Achievements
One thing that Mars has had since he started and perfected in the music industry is the achievements he has had over the years. He has only two albums in his entire music career. Regardless of that, he has been nominated thirteen times for the Grammy Award. One of his songs, Just The Way You Are, has won a Grammy for the Best Male Pop Vocal Performance. The song is also a 12X platinum blockbuster that has featured on the Billboard severally. Another song, Marry You, has featured in top movies like Jumping The Broom. The two songs are part of the album, Doo-Wops & Hooligans, produced and released in 2010. Grenade and The Lazy Song are also among the songs of that album.

The 2015 Las Vegas Tour
Mars will be opening the new venue at The Cosmopolitan, The Chelsea. He will be performing on the New Year Eve, December 31st. The two shows are expected to bring in more fans and usher the new year in style. It has approximated that over one million fans are already following the show. Also, there are many tickets that have been sold already. The City of Entertainment is ready to offer the locals and other visitors an ultimate touch of performances that will usher them into the New Year.

The Amazing Venue
Over the years, The Cosmopolitan has been a venue for many shows held by top musicians and singers in America and around the world. The exact venue, The Chelsea is one of the best around The Cosmopolitan. It is a 50,000 square foot venue that has been perfectly designed for a vibrant show. The venue also features high-quality, glass chandeliers, making it a beautiful place. There is also a private VIP opera boxes for the high-priced tickets. You will also enjoy a stylized grand staircase in the venue. What’s more, there is a vestige brick tiling, along with a diverse set of stage production upholds. You can also experience an advanced technology that gives you the reception for a concert. It is important to know that the venue can hold about 3,000 guests. That assures you of enjoying the performance of the Honolulu-born pop artist.

The Tickets
The Bruno Mars Vegas Show is expected to take place on the 31st of December this year. The Chelsea brings you the tour in a better way.

Entertainment Into The New Year
There is no better way of entering the new year than when you are celebrating. It is expected that Bruno Mars will usher his fans through into the New Year as he rocks them with his top hits. It might be a fan’s choice to decide which song he will play, but he could pull off other top hits. Bruno promised the Las Vegans to be ready for an incredible show. He will be performing with the Hooligans, and he has vowed to entertain his fans to the fullest. The show might cost you a little bit, but you will be sure of having a new encounter with the singer and enjoying every bit of the show. It is understood that Bruno is currently on a tour elsewhere, but he is also working on his performance with his band.