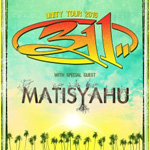 The famous alternative rock band 311 (pronounced three eleven) has announced a 6-week summer tour in the US, that is going to take place from June 29th till August 14th 2016. The five members of the group will performing in several cities across the country, like Chicago, Salt Lake City, Detroit, Milwakee. Of course, you can also have the chance to see them on stage live on July 2 and 3 in an amazing show, that will take place at the Mandalay Bay Hotel & Casino in Nevada, US, Las Vegas. So, get ready to sing and dance with the 311 Vegas in a two night event for a special 4th of July weekend event with fireworks in Las Vegas.

If you are a fan of reggae, rap and funk, get ready to enjoy their incredible show in Vegas. The celebrated rock band 311 will cover just about everything from their early days to universal pulse and of course their new album. They will play many of their most amazing songs, like the 'Down', 'All Mixed Up' 311 are masters on the stage and be able to rework their own set-list in several wayt, in order to get different audience reaction in every concert. They are also known of their great and lively live shows, because the 311group keeps things constantly evolving every nights.

The 311 is and American rock band, that was formed in 1988 in Omaha, Nebraska. The band is consisted by Nick Hexum (vocalist and guitarist), Jim Watson (lead guitarst), who was replaced later on by Tim Mahoney), Chad Sexton (drummer), Aaron 'P-Nut' Wills (bassist) and Doug 'SA' Martinez. All five members of the rock band grew un in the 1970's in Nebraska and spend their teenage years at the other side of the town (the west side) the time and they all went together at the High School at the westside. Moreover, P' Nut and SA Martinez though lived on the south side of the same town (Nebraska) and attended the Bryan High School. During the years the spend at high school, two of them, Nick and Tim, used to play and performed together in a local rock band, under the name 'The Ed's' in the town and earned a number of fans.. Moreover, Nick and Chad also joined the concert jazz band of their high school and they were actually really active. All of them loved music since they were kids. After graduation, the 3 of them realisex they had a special musical chemistry. The band derived its name form the Police Department code, in Omaha, for indecent exposure after the original guitarist of the band was arrested for straking. Jim Watson shortly after departed the group and was replace by Tim Mahoney. In fact, the rock and reggae band from US began honing their amazing skills and performed in many local places, before they eventually moved to Los Angeles, California and signed with Capricorn Records in 1991.

During the 1990's, the band released a number of great albums, including the 'Music' in 1992, 'Grassroots' in 1993 and two years later they released 'The Blue Album', which peaked at No. 12 on the Billboard 200. This actually helped their singles 'Down' and 'All Mixed Up' to sell more than 3 million copies in the United States of America. The next year they performed a number of relentless tours around the world, in order to make their music known. In 1997 the modern band group released the 'Transistor' album, which became platinum. Two years later they also release the 'Soundsystem' and after that they decided to switch to Volcano Records. With their new company, they actually recorded their 6th album under the title 'From Chaos' in 2001. During these years (2000 and 2001), they actually played 47 songs and in 2002 they increased their amazing list of songs to 59. In 2004, the celebrated band played 68 songs, as well as a number of entire albums, covers and rarities. By the end of this year, they also released a DVD, that consisted of 64 of their 68 songs and their fans just loved it. Two years later, in 2006, they performed in Memphis, TN, at the Mid-South Coliseum, where they performed and played 65 of their great songs. Their 7th album, under the title 'Evovler' eventually turend out to be their worst on in 2003, but went on to release a 'Greatest Hits', that was compiled of hit singles, in order to celebrate the 10 years that the group was together. In 2005 they released thei 8th album under the title 'Don't Tread on Me', which was followed in 2009 by the next album 'Uplifter'. Later on they also released, “Universal Pulse” in 2011, and “Stereolithic” in 2014.

311's nine albums have reached the Top 10 on Billboards Top 200 Sales chart with 9 of their singles reaching the Top 10 on Billboard's Alternative Rock Band Radio Chart. The alternative 311 played 85 different songs throughout their amazing career, including 3 songs with a 25 person choir of gospel, that in fact joined them on stage. They also premiered a couple of new songs, and had Mark McGrath join on two songs, and were backed out by a state of the art light show with a number of amazing special effects. Among their amazing series of singles, the 'Down' is their most played among all and the second one is the 'Beautiful Disaster'. In addition, 311 Vegas always managed to choose some great opening bands for their shows and their fans just loved it.

The band 311 bring a whole army along to perform together on stage. You will hear some of their most amazing songs and you will see a show that you have never seen before. The rock band 311 has been entertaining millions of fans for over 20 years and continues to produce critically acclaimed music. Comprised of Chad Sexton, Tim Mahoney, Doug Martinez, Aaron Wills and Nick Hexum, the 311 rock band has released 12 studio albums in their whole career, selling more than 8 million copies just in the United States of America. Furhtermore several critics have also praised the band’s live performances and shows. The 311 band is aslo all set to release its latest album this season, that will be followed by a countrywide tour of rocking live acts.

Don't miss the opportunity to enjoy the amazing show of the rock and reggae band 311 in Las Vegas. It will be a show that you will never forget and you'll also have the chance to sing and dance along with the 5 amazing rockers!