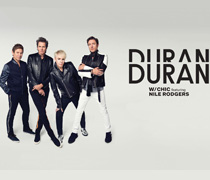 Duran Duran playing live in Vegas is sure to be a fantastic event. This historic band is always electrifying when they play live, and what better place to host them than Las Vegas itself? If you want to brush up on your knowledge of Duran Duran in preparation for their next gig in Vegas, then simply read on! Below, you will find all of the facts, insider info and knowledge that you need in order to withstand a conversation with even the most hardcore of Duran Duran fans during the interval of their next concert in Las Vegas.

Duran Duran Las Vegas: where will they be playing?

Duran Duran are booked for the Mandalay Bay Events Center. This is a 12, 000 seater indoor arena located within the Madalay Bay resort and casino. You may know this resort, as well, for the famous pool parties that are hosted there. When Duran Duran are playing at Mandalay Bay Events Center, you can be sure that the resort will be buzzing: you can make it a whole day of entertainment with a flutter in the casino, a relax by the pool and then a visit to the Duran Duran concert in the evening.

Duran Duran have played in Sin City several times before, both in concert halls and in festivals. In 2015, for example, alongside Stevie Wonder, they headlined Las Vegas's Life is Beautiful festival to great acclaim. It could be argued that many of Duran Duran's most diehard fans hail from Vegas, or first saw them perform in Vegas, due to the many sellout concerts that they have performed there over the years.

Who are Duran Duran?

Duran Duran is a band that was formed in 1978. The band is English, and was created in the English city of Birmingham, which is famous for its industry and working class culture. They are a very successful music act, and enjoyed particular fame in the 1980s both in their native Britain and beyond in nations such as the US.

The band's genre has been somewhat fluid. Duran Duran definitely falls within the category of 'synth pop', and it is generally accepted that this band is part of the so called 'new wave' of synth pop. In addition Duran Duran was also part of the so called 'second British invasion' of the US in the 1980s: this refers to the bands from Britain that came over to the US at this time and took it by storm with their concerts - something that Duran Duran continue to do in places like Las Vegas!

The four members who will contribute to the lineup in Vegas all have amazing musical careers behind them, both as solo artists and as part of Duran Duran. Le Bon is the band's lead singer and lyricist, whilst Nick Rhodes is both the keyboardist and a founding member of the band. Johnny Taylor plays bass guitar, and he is another co founder of the band. Finally, Stephen Duffy has played drums for Duran Duran from the very beginning. Le Bon is the only current member who has not been in the band from the start: Stephen Duffy was the first singer of Duran Duran.


What are some of Duran Duran's greatest hits?

Fans will debate endlessly about which of the band's songs is the best, of course. However, perhaps the most famous song in the present day is 'Girls on Film'. Duran Duran have had several number one hits, with the earliest being 'Planet Earth'. Their albums include 'Red Carpet Massacre' and 'Paper Gods'.

In total, Duran Duran have sold over 700 million records worldwide - and counting. Surely they will add to that total after their upcoming gig in Vegas! Who knows what they will play when they hit Vegas, perhaps a mix of old classics with some new work, too. Their new album, 'Paper Gods' is still fresh off the press!

Where does the name 'Duran Duran' come from?

The band's name comes from the science fiction film 'Barbarella'. In this French film, there is a doctor named 'Dr Durand Durand'. Altering this name a little gave the band their name!

Any hot facts about Duran Duran?

Duran Duran were one of the first bands to have professionally produced videos released alongside their songs. They got professional directors to shoot music videos for them on 35 mm film. This has made the band's image very slick and professional from the start. Check out some of their videos online and you will instantly see what we mean!

Are you ready for Duran Duran Las Vegas?

Whether you are of the generation that first knew Duran Duran, or whether you are totally new to the band, there is no denying that this concert in Vegas will be an unmissable event. In the present day, this band have been giving classic British synth pop a fresh new feel so it is definitely worthy catching some of their hits when they come to Vegas.

So, the bottom line is: Duran Duran is a world class band with an amazing history behind them and they are on their way to play Las Vegas. This is yet another stage in the band's 'invasion' of the US - an invasion that has been going on for several decades and which is very much welcome. If that does not get you excited, then we do not know what will!