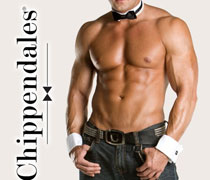 Chippendales Las Vegas is a very popular show, especially among girls who want to have fun in the so-called Sin City. Who said only men can have a good time in Las Vegas? One of the secrets of the popularity of Chippendales is that it caters to the fantasies of women. This is why one of the most parts of the have the guys start out in full suits then they take off their clothes one-by-one until all they are wearing are their undies. So what are the Chippendales wearing, boxers or briefs? Well, let’s just say that they really do not have a particular preference.

One of the things that is common among the cast of Chippendales is that they love to wear hats, especially fedora hats. After all, women love men who are well-dressed from top-to-the-bottom. But even if the like to cover their heads, they like to air their bottoms so to speak. Which brings us to one of the moments that has made Chippendales one of the most controversial shows in Las Vegas – the bare buns blackout. Well the name speaks for itself. During this part, the audience gets to have a good view of the men from behind. This is again playing with girls’ fantasies since we all know that most women are crazy about men’s butts....

Of course, taking their clothes off is not the only thing that the Chippendales guys can do. They are also a very talented bunch. For one, all of them are very good dancers. Women love men who can do a mean dance move on the dance floor right? And when these guys move, they surely know how to flaunt their well-toned bodies. These men are not muscular but they do not look like freaks or someone who can work for the WWE. They have just the right amount of muscles to turn women on and not intimidate them. Yes, for sure these guys work out but it does not seem that they spend all their waking hours inside the gym.

Women also love men who look clean, who look like they know how to take care of themselves. Chippendales Las Vegas guys look like they just came out of the shower every time. Not only that, it also seems that they pay regular visits to the barber or the beauty salon because of their well-dressed hair and their silky smooth skin. Yes, these guys may strip off their clothes for a loving but they surely look good enough to take home to mommy. And they do look like their smell good. Good hygiene is on the top of the list of what women are looking for in men. And in that department the Chippendales men get a high mark.

The different scenes also cater to women’s fantasies and yes, of course, of gay men too. There is the navy scene, of course, for those who are crazy about men in uniform. Then there is the fire-fighting scene where the men wear red briefs while wielding an ax. Are you into vampires? Then you will love the vampire where it is revealed that undead men like to wear black underwear. That is not a surprise, of course. Do you have a thing for sweaty construction workers who like to catcall women? Then you will go ga-ga over the construction scene of the show. Michael Jackson may not be considered as fantasy material by some women but who can resist men who can do a mean MJ impersonation while dancing to the tune of Smooth Criminal?”

In recent years, other shows similar to Chippendales Las Vegas has appeared on the scene. The most notable is Excalibur that originated in Australia. But Chippendales Las Vegas will always be the original. And those that come after it will only be considered as copies no matter how good they are. The show has been around for a long time that it considered by many as an institution. And their popularity has grown not only in Las Vegas but all over the world. In fact, the group has made tours in different countries the world even reaching countries as far as Asia.

No doubt about it, Chippendales Las Vegas is a controversial show. It has been criticized by some groups in society as promoting the objectification of human being, particularly men. But one thing that no one can deny is the fact that the show provide equal opportunity for women. That is equal opportunity for women to have as much fun as the men when they are in Las Vegas. If men can go and watch a burlesque show or go to a strip club then women have a better option than simply commiserating with other women. They can now also have a wild night and watch muscular good looking men fulfill their innermost fantasies even for just one night and even if it just on stage.

Going to a Chippendales Las Vegas is also an opportunity for women to let their hair down and to have a good time. And when you do go to one of their shows, you will get drowned by the noise inside. Can you imagine the sound of 300 women screaming and giggling? Some, instead of hiring a male stripper, simply go to a Chppendales show to celebrate a bridal shower. These shows also attract different kinds of women. Young and old, wealthy or middle class, all of them can have a good time in the company of women while watching men gyrate with their ass out – literally.

One of the things that one can appreciate about Chippendales Las Vegas is its longevity. It seems that men taking their clothes off does not get old. But the show’s success can also be attributed to the fact that it is evolving over time. In fact you can watch a show now and then watch it again a few months after and you will surely see a difference.