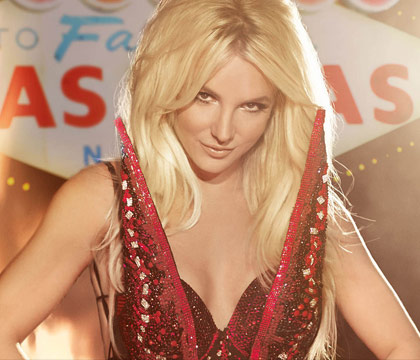 Britney announces her Residency in Vegas in style

Britney came off a successful Femme Fatale Tour in December 2011 and for a couple of months there were rumors about where Spears would take her residency. To announce the decision to take up residency at The Axis at Planet Hollywood arena was announced with an elaborate stunt that involved a thousand Britney lookalikes perform a card routine in the Nevada desert that could be seen in Space (if anyone was watching).

When the Britney Spears show named Pieces of Me was unveiled the Planet Hollywood had been extended to sit 4600 people as was the stage to allow for the club like feel and the numerous choreographed acts taking place on two thematically different stages to enable Britney’s party vibe that would engage the audience to actively participate in the show.

The concept of the Britney Spears show was to have a party atmosphere featuring over 20 Britney’s popular songs and songs from her latest studio albums. A 360 media wall would be shown to create the illusion of being in a planetarium. Another set had Venus fly traps; another would have a disco theme and a runway shaped like an inverted anchor. Britney would have 14 dancers and a live four piece on band. No miming, no singing to a back-up track – pure unadulterated music with all the features that make a musical performance great. It seemed like a lot for a 90-minute show but for two years Britney pulled it off.

The concert begins with Britney’s home video of her dancing around as a child showing the public the dreams of a young Louisiana Girl who dreamt of singing only to become a global icon. When the Piece of Me slogan comes on you still see young Britney in Montage and the Britney flies in a big globe that drops from the ceiling to the floor and she start singing “work Bitch”. This is where Spears captures the audience with her exceptional choreography and musical prowess. After this she moves to the song “womanizer” where she and her choreographers do awesome arm choreography reminiscent of the Young Janet Jackson’s “Rhythm Nation”. Just when you think she’s about to go into another song and kick the performance up a notch she starts speaking to the audience, gracefully welcoming them to the show and thanking them for their support in that sweet melodic voice that is so endearing. She engages the audience for the first time asking them to count her up to the next song where she reenacts the dancing and trapeze choreography like in the video.

A person can only muster so much grueling acrobatics through three songs and Britney shifts gear and goes into the next segment of the show with a poetic angelic intro where the audience see a video of Britney reading a poem. At the end of that, the screen splits and Britney comes flying in with wings suspended over the stage. During this performance, where she sings “every time” white flower petals fall like snow on the audience from above. The audience goes into hyper mania when the guitar riff to “hit me Baby one more time” comes on followed by “Oops! I did it again”.

The show’s production clever use of video and props and the unusual stage bring an otherworldly vibe in the arena. Each segment flows smoothly into the next and pretty soon you kind of miss the fact that you’ve seen two other segments when you get to the fifth segment featuring “I’m a slave for you”. There is more dancing, more circus like choreography, more glitz and glamor that depict the razzle-dazzle atmosphere you’d find in Las Vegas where wildness is encouraged and inhibitions checked at the door.

Britney has taken the world of live performance to another level. Some people see the Britney Spears Show more than once and every time they come out spellbound. Reviewers described it as a “larger than life” show, a Vegas party scene that takes you back and forth through the various incarnations of Britney as a singer and performer. Britney had several costume changes that included some of the outfits she wore in past memorable performances.

The contract Britney had with The Axis at Planet Hollywood Arena reportedly earned her 30 million a year, which is whole lot less than what Celine Dion, has been making. However the Britney “Pieces of Me” show has been a huge success breaking ticket sale history in Vegas, now instead of bidding adieu to Sin City after the end of her two-year contract, Britney is rumored to have extended her contract and negotiated more money. She made $310K per performance but now she stands to make $475k per performance, a thousand dollar less than the queen of Vegas shows herself, Celine Dionne.

Sharing herself with her fans

Britney has made gossip tabloid headlines in the past for bad behavior but maybe she was just a misunderstood person who loves the world and adores her fans. She has been known to write letters and swears that they are personally from her. Recently she wrote to a fan who came out of the closet. There is another Britney fan who is said to have received an invitation and two tickets from Britney herself to watch the show in Sin City. For die hard fans that have “attend a Britney Concert” on their bucket list will be happy to know that they still have a chance.