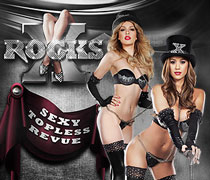 X Rocks show in Rio, Las, Vegas, has exaclty what it takes to turn up the party. In fact, it's the kind of perfect entertainment if you happen to be in the most amazing city of lights, casinos and great strip shows, which helps make Las Vegas what it is, an adult playground. The topless show has that certain something, that will cheer you up and make you have a wonderful time: the elesive sexy mojo. It's a show that combines sensual dance of hot sexy topless ladies, with great bodies, with iconic rock hits, in order to create a spectacular performance, especially for rock 'n' roll' fans. So, make your way to the Rio Hotel and Casino in Las Vegas for spending some amazing nights, filled with gorgeous sensual ladies, the hottest rock music and much more.
In the show, five women, often topless, are dancing for you under the sounds of heavy metal music for more than 90 minutes. The sexy shows are played by a different set of rules. The dancers are absolutely gorgeous, with nice costumes, showing their great body moves and make you thrilled by the show. The dancers on the stage show their physical attributes, by revealing thier clothes or they are even toplessness. Moreover, the show girls dance with the rock music and perform seductive dances that will amaze all. The girls are sparkling and will entertain you, with their naughty shows and gorgeous bodies....

The show was produced by Angela and Matt Stabile, who were also made the popular XBurlesque show for the last 12 years. Due to it's great success, the couple decided to focus more on a new topless show, by combining burlesque with rock 'n' roll in the most perfect way and make it a 'hit' in the town. In fact, they did a great job. With 'X Rocks' the couple selected some of the most great rock songs of all time and combined them with an amazing sexy choreography. They also found the most amazing girls, with killing curves and bodies and created the most fabulous strip adult show in Las Vegas.
Here you'll have the chance to see the most erotic sexy girls to dance in the most seductive way. The girls are professional dancers which are trained accordingly and know exactly how to move, dance and perform in front of your eyes. They seem llike Hollywood actresses, dressed in the most spectacular way. Their costumes are inspired by rock heavy metal music and in some parts of the shows they also wear hats. You can watch the sexy X Girls strut to songs from artists like Slash & the Conspirators, MUSE, Metallica, Alice in Chains, Alice Cooper and Metallica among many others. Here the dancers are very well trained and talented and avobe all they look really spectacular. Moreover, the dance numbers can keep you engaged all the time. Even though it's a strip show, it has a touch of class and if you scan the crowd, you can see plenty of people to share this entertainment with their partner.

X Rocks Las Vegas is more theatrical than the two previous shows that were produced by the famous couple in the previous years. In this one they added new sounds, lightings and videos, in order to make it more spectacular; better music sounds and all kind of effects intermix, in order to make the best outcome. The stage lights up, music begins and the girls dance!
Moreover, the dancers in X Rocks have come from different part of the world and have worked for a number of other great shows in Las Vegas in the past. They know exactly what to do, they are very experienced and they know all the secrets of their 'job'. More specifically, two of the new temptresses arrived in Las Vegas from France, in order to join the famous 'Crazy Horse Paris' at MGM Grand. Both Alexandria Jeannin and Emilie Constantine fell in love with this X Rock strip show and after Crazy Horse closed, they didn't go back to their country, but prefered to join the amazing X Rocks show. They are joined with three other gorgeous girls; by Jennifer Roush, Jessica De La Gado and Moorea Wolf and they perform a sexy choreography. Jessica, who were in the Rio's Show in the Sky before joining X Rocks, starred in the 'Shades of Temptation' at New York-New York and played in the 'Queen Vampire' in 'Bite' at the Stratosphere. Also Moorea was see in 'Bite' and Jennifer at 'Show in the Sky' and later in a show at Planet Hollywood. Moorea is a multi talented young girl from Canada with purple hair. She does an aerial piece in the show and you'll have a great time seeing her performing on stage with her great numbers. Also, Emile and Alexandria are incredibly sexy girls, who came from France and joined the show. They are very beautiful, with amazing bodies and dance in the most naughty way. Jessica is from Puerto Rico and her dances amaze people. She has great long hair and beautiful eyes and knows exactly how to move her body in the most erotic way. All the girls in the show are very experienced and know exactly how to perform erotic dances on the stage and make you want to come and see their show again and again.
The programmed lighting as well as the video screens of the show are really amazing. The choreographer Anthony Cardella and co-producer Tiffany Koepp, who is Angela's daughter delivered a great performance. More specifically, the lighting includes projections of shapes and just about anything else you can think of.
X Rocks also features the comedian/artist John Bizaree, who accompanies the show with his signature comedy. You may have seen him performing on The Tonight Show. Here, Bizarre takes on the challenge of being the funny guy and entertainThe X Rocks Las Vegas show is at 10 pm., from Thursdays through Sundays.