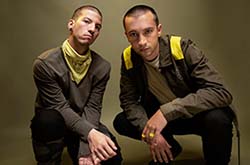 The Twenty One Pilots band will be bringing their "Bandito Tour" to the MGM Grand Garden Arena in Oct.

Who are the Twenty One Pilots?

Twenty One Pilots is an American musical duo that has its roots in Columbus, Ohio. It was formed in 2009 and originally had four members. They put out two self-released albums; Twenty One Pilots in 2009 and Regional at Best in 2011 before being signed by numerous producers and promoters. They were later signed by Fueled by Ramen, and after a dozen record labels, they decided to go with the subsidiary of Atlantic Records. They released their debut album Vessel in 2013 and Blurryface in 2015. In 2011, two band members left the band. After they had left, a drummer Josh Dun joined the group. Dun was a drummer for the House of Heroes before joining Twenty One Pilots.

The decision to have Twenty One Pilots as the name of the band was made by Joseph Tyler while studying a book of a play about a man who was responsible for the deaths of 21 pilots after he sold plane parts that were faulty. He had to decide what was best for his family due to the situation he had put them in to feed them.

In 2009 and 2011, Twenty One Pilots Self-released two Albums. Self-releasing an album means to write, record, and name your song, then create the album artwork and photography and then register for royalty payments, Order Cd’s online, sign-up to any social media accounts and use word of mouth to anyone you know to submit your song for airplay. This seemed to have been a success for them as their first album became a success and they chose the same road for their second album.

It is during their second album free CD release show that the duo attracted dozens of labels who were interested in signing them up and finally they chose a record label to go with. Even though their first and second album’s songs were free at the time, they are currently not available for free download.

Joseph was born in 1988 in Columbus Ohio. His mother is a teacher and His father a school principal. Joseph has two brothers and a sister. In his young adult life, Joseph played basketball and even went out to play for a school basketball team. He, however, rejected a basketball scholarship after he saw a songwriter perform on the streets. This inspired him to make music where he started singing and playing the guitar that had been gifted to him by his mother. Joseph came up with the idea of the band and invited his high school friends to join him.

He has had a few other projects that have been successful. Some of these are; he released some songs while still in high school that were relatively successful and were available as free downloads online, he has been featured in a song by Christian rapper Jocef and other several projects like documentaries and awareness campaigns. He is a practicing Christian and married to Jenna Black.

Dun was born in 1988 in Columbus Ohio, has two sisters and a brother. He taught himself how to play drums when he was little, though his parents did not like it. Dun played as the House of Heroes drummer for a short while as he was holding for their drummer who had taken a sabbatical but then returned. After that, Dun joined Joseph and became the Twenty One Pilot's Drummer. Dun is a Christian. He had been dating from May 2013 to September 2014 but is currently single.

The band self-released their first self-titled Twenty One Pilots album in 2009 and immediately began touring Ohio. This album was available for download and listening online and was free of charge. They released their second album Regional at best in Ohio in November 2011. It is after this album that they signed up with Ramen record label after which the free downloadable online content was not free for download anymore. The label produced and released a number of songs before releasing an album Vessel in January 2013. The duo's songs have performed reasonably well in America's and other country's billboards. Their last album Blurryface was released in May 2015 and went ahead to have one of the songs peak at number two on the Billboard Hot 100 as well as number one on Hot Rock Songs and Alternative Songs.

Beginning May of 2016, the band will be on tour around America and some cities in the UK and Canada as well. They have a number of concerts to perform from the east coast of America to the west coast. Their tour calendar looks packed to the brim with their tour likely to end towards the end of August or early September.

The Twenty One Pilots concert in Las Vegas will be held at The Joint-Hard Rock Hotel Las Vegas on July 15th, 2016 starting at 7.00 Pm. We are sure the concert will be sold out months before the event. This is your time to grab the opportunity and get your tickets as early as possible to avoid missing this great opportunity to watch Twenty One Pilots Concert in Las Vegas. This will be a great concert that we are really looking forward to. You may not get an opportunity again soon, so book your ticket now and get to enjoy singing along and listening to this awesome duo.