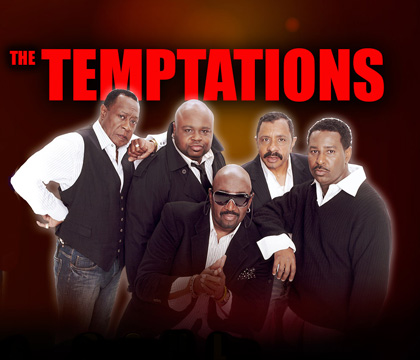 Las Vegas is the land of luck and fun. It is a city full of casinos, shows, and cabaret. The high volume of visitors has given Vegas the reputation of choosing quantity over quality. Many first time visitors do not know which venues they should visit. If you want better shows, quality concerts, and unforgettable experiences, you only need to look a little further. One such experience for you could be The Temptations concert in Vegas.

The temptations would not normally need any introductions. The five-man soul vocal group has been recording for over 40 years. Their unique sound and perfect choreography has not only made them popular but also helped shape today's industry, especially RnB and soul music. The Temptation's songs have topped worldwide charts and they can boast album sales of over tens of millions.

The group began in the 60s and was originally called The Elgins. They actually started off by joining two rival Detroit vocal groups. The group's members changed several times and sometimes numbered four or six, instead of five. Through the decades, they have won so many awards that it would be difficult to list them all here. Probably their highest achievement was winning no less than 3 Grammy Awards and the Grammy Lifetime Achievement Award.

In the Temptations concert, you might listen to some new voices. Terry Weeks has been a tenor in the group since 1997. Ron Tyson, also a tenor, joined back in 1983. The third tenor, Otis Williams, is the only remaining original member of the group. The Temptations also include Larry Braggs, baritone, and Willie Green on bass, both of which are recent additions.

Whilst Otis Williams, known as "Big Daddy", is closing in on 75 years, he is still pulling some amazing stunts. He isn't only the glue that keeps the group together. He is the godfather of the group who provides the sophistication and uniqueness of their songs. He is also pushing the group to new heights of perfection. It might cross your mind that they're practically a tribute band since only Otis remains, however, it is the same, powerful combination which could rival the original 5.

Music that will take you back

It is hard nowadays to find concerts which really take you back to the golden age of soul and RnB. The concert includes best-selling singles, including “My Girl”, “Papa Was A Rolling Stone”&“Ain't Too Proud To Beg”. The Temptations concert in Vegas will also include some lesser known songs which they hold in their repertoire. In the two-hour concert, you will have the opportunity to hear relatively new material which hasn't been over publicised.

Several contemporary artists have influenced the group over the ages. Their soul was inspired by big names, such as Wilson Pickett and the great James Brown. As the group evolved it took inspiration from Sly Stone and began creating songs based on current events. One such song was “Ball of Confusion”, and it centred around the controversial Vietnam War. Later on, groups like Parliament-Funkadelic and Family Stone would contribute to The Temptation's funk period.

The Temptations experience is not one that should be enjoyed seated. Many members of the audience admit to getting out of their seats and letting the music take over and move their body. It is part of the exhilaration which these Motown artists bring out in people. This, together with a psychedelic rock sound will allow you to be immersed in the unique sound of psychedelic soul.

To help you on your feet, the group dresses in funk inspired, matching clothes. They themselves dance blissfully as they sing their great songs. The magically choreographed dance, which has been perfected over the years, is like nothing else ever seen outside of their concerts. They are able to attract and engage older loyal fans as well as newbies who stumbled upon their show.

The Orleans Hotel and Casino

Because we know how excited you're getting about this, we're here to let you know that The Temptations concert in Vegas will be held at the Orleans Showroom Theatre inside the Orleans Hotel and Casino. The next concerts are going to be held on the weekend of the 1st and 2nd October at eight pm. The intimate venue offers unobstructed views of the stage. The sound is masterfully controlled to ensure that it sounds great wherever you are. All the seats in the house, therefore, are good seats.

In The Temptations's own words, they continue to perform in order to bring people joy. This honest and pure revelation resonates in all of their music. During the concert, performers and audience alike sing at the top of their lungs. It is not uncommon to see people reduced to tears when their concert is over or after their favourite song finishes. The Temptations concert has the ability to create a euphoric high which blocks your mind from any distractions.

A Weekend To Die For

Why not spend the weekend at the amazing hotel where you can enjoy so many facilities. You can try your luck at the casino. Or maybe go bowling. Train for an hour and then relax in the outdoor pool. What a romantic weekend! Why not use this as an opportunity to get together with old friends who you used to dance to The Temptation's music with? You can get back to your good old days and reminisce, or maybe going there to celebrate your anniversary. For the even more romantic persons out there, perhaps a surprise proposal?

The Temptations bring with them an astounding history of song and passion. They have created sounds varying from funk to disco and even adult contemporary. Their music has changed through the ages, mirroring the change in the culture of Detroit and the industry. Experiencing The Temptations in Las Vegas is one of those things that you simply must do. Only there will you be able to fully appreciate the group's influence and eternal legacy. Their music should be shared and celebrated. It's one of those rare cases where you should go against the popular saying "What happens in Vegas, stays in Vegas!"