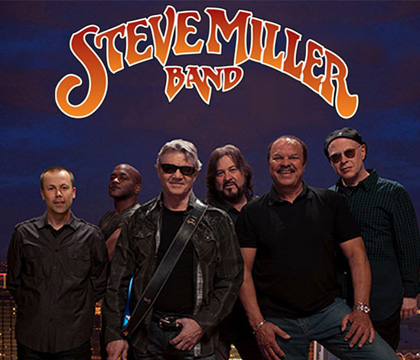 The celebrated rock band will be bringing their splendid classic voices to Vegas on the 12th August this year. The live performance will go down at the Cosmopolitan of Las Vegas and is expected to be the most memorable show of 2016.

Who is Steve Miller?

The Steve Miller Band comprises of Steve Miller himself as lead vocalist, guitarist Kenny Lewis drummer Gordy Knudston and bassist Joseph Wooten. The popular band is known for albums such as Children of the Future, Sailor and Brave New World. Their hit singles include The Joker, Living in the USA, Take the Money and Run and Abracadabra among many others. They rose to fame in the 70s and from then henceforth have magically thrilled lovers of rock with their unique style pegged on American Root Music.

A blend of rare tastes

Steve Miller’s music is a blend of rare tastes fusing elements of blues, smooth jazz and pop rock in a single scoop. Few entertainers have had that kind of creativity that draws fans regardless of age like Steve Miller. Their 70s hit singles turned to be a pillar of classic rock radio and a model for other rock artists who would join the scene. Their albums have sold millions and millions of copies, and this year saw Steve Miller enter the Rock and Roll Hall of Fame as a solo artist. The band has a star on the Hollywood Walk of Fame and also boasts an ASCAP Golden Note Award bestowed to them in 2008.

What you can expect

With their dynamic sound and doing more time fans will not be disappointed as they get treats from their singles such as “Rock’n Me,” “Fly Like an Eagle,” and “Jungle Love.” From their previous performances, Steve Millerr band takes control of the stage. Their performances get everyone immersed in their tunes of captivating psychedelic lyrics. Steve Miller band is determined to give you a memorable of energetic performance.

Steve Miller’s show in Vegas is expected to be a success with a big turnout of fans. Fans are excited, because Steve Miller is one of Rock’s most important superstars. Fans see past the age of their songs as their impressive voices still feel like chocolate to the ears. In their recent concerts they have been praised for their high energy and long hours of performance, unlike their young counterparts who put in some 15 minutes and then run away from the stage.

At the Vegas Steve Miller band is expected to perform their old hits spiced with recent tunes. Steve Miller will be collaborating with his band of multi-talented players to give a good performance. Steve Miller and his experienced band are the experts in blending different concepts and genres into a cohesive masterpiece. Everybody likes to see the music they grew up performed by their original artists. Steve Miller band makes this possible for our older generation who went wild as teens with this sensational band back in the 70s and 80s. As this happens the younger generations also gets a taste of what made the 70s and 80s rock, back when music was music

Steve Miller band Vegas show is an opportunity to celebrate the old stars and their unique style, a chance for socialization, self-expression and spreading TLC. A chance to get electrified with their unforgettable performances.

This is friendly band that gets to mingle with the crowds sharing jokes and drinks. Stick around after the show and you just might share a joke with the affable members of this band and get an autograph to boast to your peers. They meet their fans after the play, unlike others you might have encountered who charge extra for meet-n-greets.

The show organizers have landed a masterstroke bringing to Vegas legends of the 70s American Rock. Their half a century and 15 album career experience is good enough to convince anyone that the show will be worth the while.

As sure as eggs is eggs you can expect a non-compromising powerful performance from Steve Miller band come August 12. If you are a fan you already know this, and you will come prepared for a night that will go down the books of history. Steve Miller does a powerful performance and that is the reason he was inaugurated into the Rock and Roll Hall of Fame. He sounds amazing and no less like he did decades ago. The tickets to his concerts always turn out to be few because of his wide fan base. His lyrics and sounds conjure irresistible dreamy and nostalgic imageries that touch the 'rock’ hearts of his staunch fans. His laid affable manners have only served to catapult his name far up in the books of fame. The forthcoming Vegas show will be a night of flying like eagles. Plenty of beer and discounted cocktails will be flowing as the stars rock you with music that has stood the test of time.

Las Vegas plays host to spectacular concerts and events. The Cosmopolitan of Las Vegas is among the jump-off spots in Las Vegas. The resort features the Cosmopolitan Casino Spa Tower and the Cosmopolitan Casino Beach Club Tower. The luxury resort offers amenities like a 110,000 square feet casino, 300,000 square feet of performance and events space, Spas, beauty shops, Signature restaurants like the Blue Ribbon Sushi Bar and Grill and outdoor night clubs. The Cosmopolitan is home to the Marque Nightclub and Day club which is one of the top grossing nightclubs in the U.S. The Cosmopolitan is known for entertainment, hosting TV shows and concerts. This is a good clean venue with helpful and friendly staff. All guests will have an ample view of the stage during performance. There is no way your Friday August 12th will be an ordinary night. The design of this resort and the extensive dance floor in the music joint will allow you to have a memorable night. Come prepared for a night of fun.

Music is something for all of us, we all need it. It is a means by which we receive and showcase our emotions. This great artists is a symbol of that, and fans can bear witness to all the hits created. So its definitely a show to look out for.