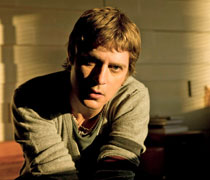 Rob Thomas is an American rock recording artist and songwriter. He is the primary songwriter and lead singer of the band Matchbox Twenty and formerly of the band Tabitha's Secret. Thomas also records and performs as a solo artist. Thomas earned three Grammy awards for co-writing and singing on the Carlos Santana triple-platinum hit "Smooth", the work he is best known for, on the album Supernatural.

Since 1996, his band has released a string of hit singles to radio including "Push", "3 A.M.", "Real World", "Back 2 Good", "Bent", "If You're Gone", "Mad Season", "Disease", "Unwell", "Bright Lights", and "How Far We've Come". In 2004, the Songwriters Hall of Fame awarded Thomas its first Starlight Award, recognizing young songwriters who have already had a lasting influence in the music industry.

Las Vegas Concert
If you grew up listening to songs like '3 AM' and you were a fan of Matchbox Twenty, then you won't want to miss this special concert live in Las Vegas, in order to hear Rob Thomas live, which is one of the best spots to watch him performing in front of a large crowd center stage. In this concert he will be playing both new and old material of his pop-rock, alternative music, so this is your chance to schedule your program. You'll be amazed by his performance, as he always gives some great ones, which you won't be able to forget. There are a lot of fans of him, who know all the words to the songs by their heart, after hearing Rob Thomas on the radio and in the car a lot of times. Now, this is your opportunity to listen to hime live in Nevada, Las Vegas.

Spectacular atmosphere
If you have ever been to a Rob Thomas Las Vegas show before, then you have seen how amazing he can be, being on stage and doing what he trully adores. In fact, most of his fans are dedicated in Las Vegas and most of the times he tries to involve them in his performance. The whole stage of his concert will be a spectacle of light, sound and colour, that will be added to the crazy and electric atmosphere, allowing the audience to be really thrust into his incredible music and his world. You have to be there to see the man himself in a spectacular concert, which will be full of music, live and of course a great performance. He awlays puts his years of experience to good use on the stage and tries to amaze the crowd for hours, performing hit singles, such as 'Smooth'. The last time Rob Thomas Las Vegas played a show in the United States was in Colorado Springs, in 2015. Overall, he played a total of 211 gigs in the country.

Musical Career
The lead singer of the 90's alternative sensation Matchbox Twenty is mostly adored by his fans for his solo work. With this band he had achieved huge success and mainly because of Thomas' song wrinting and vocal skills, which were amazing and continues to amaze his fans even today. The group featured Thomas on piano as well, Kyle Cook on guitar, as well as backing vocals, Bryan Yale on bass and Paul Doucette on drums. At his intimate live shows, Rob Thomas Las Vegas eschew the arena-sized sound of Matchbox Twenty in favor of a more acoustic oriented treatment of the hits of his band. On his Cradlesong Tour, in 2010, he practically blew his fans away with his powerful vocals, his impressive humor and his talented performance. In addition, in some later appearances and shows, in 2013, his fans were so enthusiastic, that every year they await with great enthousiasm his new concert tours and appearances.

Solo albums
Nearly 10 years after the great Matchbox Twenty formation, on April 19, 2015, Rob Thomas released his first solo album '...Something to Be', which came up to No1 in the Billboard 200 chart. That's how he started his solo career and then he produced the hits like 'Lonely No More' and 'Ever the Same'. On his first solo tour, which was entitled the 'Something to be tour', he was aslo joined by Jewel and Toby Lightman. He continued to build on his chart success and he appeared at the Live 8 concert in Philadelphia, PA, singing on his own, and also performed a duet of 'Higher Ground' with the famous Stevie Wonder. Moreover, he made an appearance on the MTV Katrina Relief Concert on September 10th, 2015. In January 2007 he released a single by the title 'Little Wonders' from the soundtrack of the Disney animated feature 'Meet the Robinsons'. He also have won multiple Grammys for writing and singing on Santana's hit 'Smooth', in the late 1990s.

Great collaborations
Rob Thomas Las Vegas has collaborated with Marc Anthony,,Willie Nelson, Mick Jagger and many more famous artists throughout his successful career. In fact his second release, by the title 'Cradlesong', which was released in June 2009, became the No. 3 in the US charts and this particular release was rang through stadiums all over the country. He also collaborated with some of the biggest names form many musical genres, illustrating his wide skill set as a great musician around the world. Moreover, the German singer and songwriter through the years has benn known as the most iconic pop lyricist of the last two decades. In fact, within these years he generated some of the greatest hits of all time and are still played frequently on the radios all over the globe today.

Rob Thomas Concert Tickets
Rob Thomas tickets have successfully being sold out every time he performs on the stage. Now, the tickets are selling fast for the Great Unknown Tour, like every time, so if you don't want to miss this great concert, you have to book your tickets now! So, you'll have the chance to witness your own piece of alternative rock heaven music in a great performance to be. Keep in mind that the concert will take place on Saturday, 5th December 2015 at the Joint of Hard Rock Hotel in Las Vegas, Nevada, at 8 pm. Get your tickets from us now.