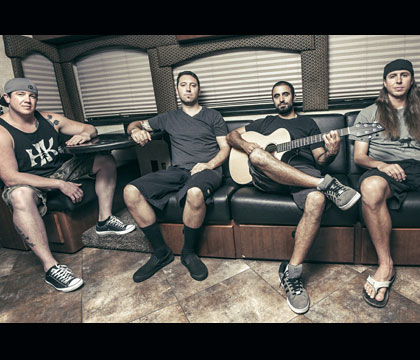 Currently one of the most popular bands for the reggae crowd, Rebelution brings their music to Sin City on the 18th of August, celebrating their unique version of the music together with everyone who loves reggae just as much as they do. The Rebelution Vegas concert is set for Mandalay Bay Beach in which there is sufficient space for people to enjoy themselves and make it one night to truly remember.


What seems to be a word play between rebel and revolution definitely captures your attention about this band. Formed around the year 2004, they have been in the music industry for more than 10 years now, originally making their mark at Isla Vista, California. With genres that appeal to all ages, Rebelution and their fans classify their music to be reggae, reggae rock, roots reggae as well as calypso. To truly understand their music, however, you will have to listen to their songs as 'well' as their albums, some of the most popular of them being Against the Grain and Invasion from their 2014 album.


Composed of four people, the founding members of the band are successful in their own right. As a matter of fact, all of them are graduates from the 'University of California', and are holding degrees in different fields. Erich Rachmany who is at the moment the vocalist and guitarist is a graduate of religious studies. There is Rorey Cary who has a degree in business economics and handles the keyboard while Wesley Finley takes the drums and graduated with a degree in Anthropology. Marley Williams has the bass and a degree in film studies. Lastly, we have got Matt Velasquez with the vocals and guitar, a former member of the band. Note though that you might meet one more member during the tour: Khris Royal who is a touring member of the band.


The release of the album entitled "Bright 'Side' of Life" showed exactly how large the influence of Rebelution was in the reggae scene. Quickly dominating the iTunes chart in the reggae genre, the band held the number one spot for a time and the number three spot in the Top Album 'Downloaded' in the 'United States', this time not just in the reggae genre but in all music genres. On top of that, the band have managed to bag the number 1 spot on the 'Billboard Top Reggae' Albums chart and placed 34th in the Billboards top 200 list. Their album entitled "Peace of Mind" went even further, holding the 13th spot in the Billboard 200 Chart, the number 1 Independent and the number 1 Reggae and the number 4 in iTunes. Within the first week, they sold more than 16,000 and also gave away free portions of the album to their fans. Count Me In, their 2014 album had the honor of being the best selling 'reggae album' of the year. Incredibly busy in their schedules, Rebelution has managed to release an 'acoustic version' of the "Count 'Me' In" album in 2015.


With more than 10 years under their belt in the music industry, it is already not surprising that there has been a lot of growth in between the albums of the band. If you listen to their 2007 album, there are very distinct signs of development as opposed to their 2014 music. The distinct, unique, as well as appealing element of their music is still there, however, which is why in the past 10 years or so, Rebelution did not lose any fans but they continued to grow, thereby gaining acclaim after acclaim with their music. For this year, their tour takes them to more than a dozen cities all over the United States which is as high as bands can go.


Past performances have shown that Rebelution is more than capable of handling the crowd while on stage. Around 2009, they were one of the few bands performing at the 'Rothbury Music' Festival. Their presence was well welcomed, resulting to further shows the next year at the 'Harmony' Festival of Santa Rosa, California. They were also welcomed as well as celebrated in other prestigious music festivals including Lollapalooza, the Bonnaroo, the Austin City Limits, All 'Good' Music Festival, and finally the Wakarusa Music Festival. All of this happened in 2010 – making it one of the busiest years for the group.


On May 2014, they headlined the 'California Roots Music and Arts' Festival and following that, there was the 'California Roots: The Carolina Sessions' Festival, on September 2014. Quickly gaining the attention of the public along with music enthusiasts, Rebelution landed a performance at the 'Reggae Rise Up' Festival in Florida -- putting them smack in the middle of reggae lovers who can further appreciate their music. Headlining in prestigious events such as the 'Red Rocks' as 'well' as the 'Santa Barbara' Bowl, their appearances have sold out each time.


The 2016 Rebelution Vegas tour schedule is just a tip off the ice berg. Usually playing at 100 to 120 shows a year, it is a very busy time to be part of the Rebelution band. Although most of their shows are in the US, the band has played in quite a few parts of the world including Aruba, Guam, Europe as well as New Zealand.


Interviews and What is In Store


Asked to comment about their album entitled "Courage to Grow", Rebelution noted that at this point in time, they felt like people could really use encouragement – which is what they incorporated it in their music. However, that confession is not limited to the Courage to Grow album since you can read into a lot of messages for more of their songs. Managing to hit a balance between the enjoyable and the comforting, it is then easy to see why Rebelution is a popular name at this day and age.


For more information about the band as 'well' as their scheduled tours, you might want to check out their website online. The Rebelution Vegas schedule is actually just one of the few they have for schedule this year.