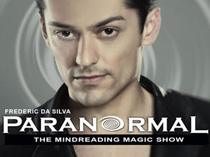 One of the most acclaimed shows on the Las Vegas Strip, Paranormal – The Mindreading Magic Show Vegas features the remarkable talents of Frederic Da Silva. An internationally known magician and mentalist, Da Silva showcases feats of intuition so remarkable, you’ll wonder if he truly does have superhuman powers. Paranormal – The Mindreading Magic Show Vegas has been running at Bally’s Las Vegas since 2013, and in that time, it’s become a hit with audiences, the media, and fellow magicians alike. It’s the top-rated live magic show on virtually every online review site. Da Silva is a truly remarkable performer, and if you’re traveling to Las Vegas, you owe it to yourself to see his unique talents in person.

Some magicians focus on sleight of hand or elaborate illusions, but Frederic Da Silva has always been more interested in the magic of the human mind. He began his career in his native France in the 90s, and quickly became one of the biggest magical stars in Europe. By the age of 18, he was already presenting his unique talents on French television, and he went on to appear on dozens of TV shows across Europe. He was honored to represent France at the World Championship of Magic, and has won multiple award for his mastery of the arts of mentalism. For his entire career, his greatest dream was to have his own show in Las Vegas, and with Paranormal – The Mindreading Magic Show Vegas, that dream has become a reality.

If you come to Paranormal – The Mindreading Magic Show Vegas, be prepared to be part of the show. Da Silva chooses audience members at random, and uses his special talents to astonish the crowd while leaving his subjects baffled. He can tell you the contents of your pockets from across the room, figure out the name of the person you’re thinking of, and even stop a clock at the exact time you’re envisioning. How does he do it? It seems as though he has mystical powers, but actually, Da Silva’s talent is the result of his unique gifts and a dedication to the art that has lasted for his entire life.

DEDICATION TO THE CRAFT

Since the age of five, Da Silva has wanted to become a magician. In the three decades since that time, he’s done everything he can to be one of the world’s greatest performers. Mentalism is a fascinating form of magic, and a very difficult one to master – Da Silva is one of only 60 members of Europe’s society of mentalists. He’s made an intensive study of psychology, hypnotism, and the secret workings of the human mind. On top of that, he’s performed over 300 shows a year for more than a decade, sharpening his skills to remarkable levels. His talent allows him to predict a word chosen at random from a book by an audience member, convince two audience members to write the same thing on paper despite neither one knowing what the other is doing, and much more. Some of his most remarkable feats can’t be described easily – they must be seen in person, and even once you see them, you may not believe your eyes.

The Las Vegas Spotlight Entertainment Guide calls Frederic Da Silva “the best mentalist in the world,” and they’re not the only ones who think that: critics, Da Silva’s fellow magicians, and thousands of astounded audience members all agree that he’s one of the best magicians in any field working today. Paranormal – The Mindreading Magic Show Vegas has some of the highest reviews on Yelp, TripAdvisor and vegas.com, with people who’ve seen the show raving about how he pulls off his feats.

Like all magicians, Da Silva refuses to reveal the methods he uses, and when he performs in front of an audience, they leave with no idea how he accomplishes the seemingly impossible. In interviews, he’s stated that French audiences are very skeptical of magicians, and that they won’t tolerate any tricks they can figure out. Because he began his career working in front of such tough crowds, he’s had to develop illusions that are virtually impossible to figure out. He says that he enjoys working in Vegas because the competition is so fierce: the city showcases some of the biggest names in entertainment, as well as some of the most extravagant spectacles ever seen on stage. He strives to outdo those shows with nothing more than his words and the power of his mind, and judging by the results, he’s succeeding wildly in that aim.

Unlike some other magic shows, in which flashy special effects camouflage the performer’s lack of true talent, Paranormal – The Mindreading Magic Show Vegas is a pure exhibition of mystery, mentalism and entertainment. The stage is close to the audience, and Da Silva interacts closely with the volunteers he brings up. Making the performance even more difficult, he relies entirely on working with real audience members in real time – he can’t fall back on prepared illusions, and he doesn’t employ audience plants or discuss the show with the tricks’ subjects in advance. (His methods for choosing candidates from the audience include throwing a Frisbee into the crowd, ensuring that nobody can say he’s not selecting truly random audience members.) He frequently stays after shows to meet his delighted fans – just don’t expect him to tell you the secrets behind his performance!

FUN FOR THE WHOLE FAMILY

As much as he prides himself on his magical talent, Frederic Da Silva also takes his job as an entertainer seriously. Paranormal – The Mindreading Magic Show Vegas is a true all-ages show: the content is family-friendly, but the performance will fascinate and astound audience members of all ages. There’s a very good reason why Paranormal – The Mindreading Magic Show Vegas has been a massive Las Vegas hit for three years and counting: it’s a wildly entertaining, truly baffling production by a world-class mentalist and magician at the height of his powers. There’s almost nobody in the world who can do what Frederic Da Silva can do, and in Paranormal – The Mindreading Magic Show Vegas, he does it as well as it’s ever been done. You’ll leave the show wondering the same thing the Los Angeles Times’ rave review did: “How did he do that?”