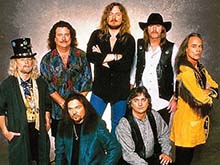 One of the world’s most celebrated rock bands is coming to Las Vegas, and you simply must attend their concert because doubtlessly, this is a once in a lifetime opportunity. The band in question is none other than the world famous Lynyrd Skynyrd that has been long celebrated as a band that represents southern rock music to the fullest. Current members of the band include Gary Ressington, Rickey Medlocke, Peter Keys, Johnny Van Zant, Michael Cartellone and Mark Matejka. The band was famous way back in the 70’s, but even now, crowds still marvel at the amount of musical talent it possesses. It is a band that had a long climb to fame, and even at its peak, tragedy and misfortune still dogged it. However, despite all these daunting challenges, the band has always made amazing comebacks.

Tiny Beginnings
Lynyrd has a very interesting history. It was founded by high school friends who shared a particular characteristic that made them outcasts of sorts: they loved to keep long hair. These are Ronnie Van Zant, Bob Burns, Gary Rossington, Larry Junstorm and Allen Collins. This was quite of the ordinary in their day, and they faced plenty of rejection for it. In fact, the name Lynyrd Skynyrd is a mockery of their physical education teacher who was particularly unpleasant to them because of their long hair world. In fact, the one of the band’s founders, Ronnie Van Zant, dropped out of high school because he could no longer stand the criticism of this teacher by the name of Leonard Skinner. The good thing is that years later, the group and the teacher got a lot friendlier, and he even helped them in their concerts especially after they changed the band’s name to mimic his own.

However, Lynyrd Skynyrd has not always been the name the band has been known by. During its formation in 1964, the founders first called it My Backyard. It would later be known as Noble Five and One Percent, before the members of the band permanently decided to name it Lynyrd Skynyrd. The band was formed in Jacksonville, in Florida. It is known for its southern style music style; it is in fact one of the best representatives of southern pride. The band seems to have a liking for controversies, as evidenced by the fact that they have been flashing the debate- filled Confederate flag around as a symbol.

But the journey has not been so easy for the band. The first catastrophe that hit the band when it was at its peak in 1977 was a particularly nasty airplane accident that claimed the life of three of its members. It was disastrous; so terrible was it that the band was disbanded. This might have been the end of the band as it stayed out of the music industry for a whole decade. After a decade, the surviving band members reformed but with major changes. For example, the lead vocalist role was taken by Ronnie’s younger brother Johnny Van Zant.

But the plane crush was only the first of many challenges that the band would face. In later years, some band members would leave the group to join another rock band. Besides desertion, accidents continued to dog the path of some band members. Two of its members were involved in a car accident as a result of drunken driving. This was one of the most scandalous moments for the band, as the general public judged them very harshly for it. In the face of such discouraging facts, the band still continued to make music and entertain crowds, which they do with so much ease, and this is what they want to do in Las Vegas this August.

Why Attend the Las Vegas Concert
One thing that is guaranteed of this year’s lynyrd skynyrd in Vegas Concert is that the band is going to take the city by storm. You are assured of a fun- packed night, even for the hard- to- impress members of the audience. The music by this band is definitely very entertaining; you can sing along to their hit songs under the cover of the crowd or if you so wish, at the top of your lungs. After all, how many times do you get to see your star rock band members performing live? How many times will you get the same adrenaline rush of seeing them in the flesh? How much fun would that be?

Additionally, the quality of music the band produces is superior. To clear any doubts you may have about this statement, you only need to listen to their hit songs. Such songs include the global hit, Sweet Home Alabama, and Free Bird, and also, What’s Your Name. Not only do the songs have great content, but they also have great rhythms and beats that will make even the most unwilling dancers swing in time to the music. So your time at your concert will definitely go to waste.

Another perk for this year’s concert is that they will be accompanied in their tour with the celebrated guitarist, Peter Frampton. If this does not describe a rare opportunity, then nothing else does. Where else do you get so much musical talent in one concert? You simply must attend this year’s Lynyrd Skynyrd if only to witness this combination of talent.

If the number of fans that this band has is anything to go by, then they are really good at what they do. So popular are they that a group of artists came together and produced an album which was named Skynyrd Frynds. The letter Y is certainly central to the bands existence. Actually, because of their music, the band was inducted into the Rock and Roll Hall of Fame on the 13th of March, 2006. That means that their names are preserved to eternity for future generations in recognition of their immense talent.

Conclusion
The lynyrd skynyrd in Vegas Concert is a must attend for anyone who intends to have a lovely night. It is a guarantee that it will be an awesome night full of fun, and you will undoubtedly enjoy it.