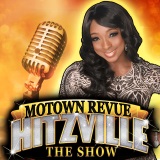 Hitzville The Show is a journey through time that celebrates the very best of the Motown era and the superstars behind the epic sound.

The show features music from chart-toppers such as Tina Turner, The Temptations, Aretha Franklin, The Four Tops and many more. The talented cast of three women and four men is backed by a five-piece band whose members once played with Stevie Wonder, Diana Ross and Gladys Knight.

See the performance that received standing ovations from Michael Jackson and the legendary Hitzville U.S.A. founder and producer Berry Gordy.

THE HITZVILLE SHOW VEGAS: An Overview

The incredible and electric performances at the Hitzville Show have been known to receive standing ovations from the “King of Pop”, the late Michael Jackson and Berry Gordon, a legendary producer in the entertainment scene.

Talented all round performer, Jennifer “Jin-Jin” Reeves plays a pivotal central role as the star in the Hitzville Show . She is quite modest though as she points out that the seven-member band has made the show a success story.

She further compliments her colleagues by saying she has the “best band in the world”. This is probably due to the fact that the seven-member band includes Gladys’s Knight musical director and Stevie Wonder’s guitar player. The drummer in the band is associated with Diana Ross. Apart from this, the group’s exemplary performance as they faithfully recreate Motown hits also validates Reeves observations.

Jin-Jin Reeves is responsible for the production of the Motown revue. The musical director of the show is the talented and experienced Scott Cannady.

Jennifer “Jin Jin” Reeves grew up in Detroit, Michigan. In terms of artistic talent and great music, the city was at its zenith at the time. This probably influenced, and played a great role in shaping Jin Jin’s career.

Jin Jin, as an eager child heading for her teenage years, was heavily engaged in songwriting, singing, and dance. In order to diversify her burgeoning skill sets and talent, she enrolled and began to study acting. Her decision roused the interests of the likes of Martha Reeves, Stevie Wonder and The Julliard School of Performing Arts. This led to a lot of welcome performance opportunities for young Jin Jin. She was also privileged to qualify for the prestigious Diana Washington scholarship.

Makings of a Music and Acting Career

The icing on the cake at this juncture in her career was when she appeared as a recruit in Ed McMahon’s Star Search show. She put her best foot forward and managed to clinch an impressive second place at the show.

In 1997, Jennifer “Jin Jin” Reeves has appeared on Steven Spielberg’s’ historical drama, Amistad. In Amistad, she acted alongside prominent A-list actors like Morgan Freeman and Anthony Hopkins. She has also had an acting role in Lorraine Hansberry’s “A Raisin in the Sun”.

She has also performed alongside dancing greats such as Alvin Alley. Jin Jin has been privileged to grace the American Music Awards (AMA).

All this cumulative experience and exposure have molded Jin Jin to what she is today. Jin Jin is a complete entertainment package. She is an extremely talented, energetic and dynamic entertainment package. This explains why at the Hitzville Show , she is able to put on an exhilarating and energetic performance on stage as she belts out tunes from Diana Ross or Gladys Knight. Her rich musical background, innate passion, initiative, and drive have propelled her to dizzying heights in the Las Vegas entertainment scene.

The show will hypnotize you and will have you swaying and singing along to your favorite Motown hits. You will be impressed by accurately Jin Jin and her team recreated music from legends such as Diana Ross, Gladys Knight, The Supremes and The Temptations. The raw energy displayed by the incredible dancers on the V Theater stage during the Hitzville Show will definitely draw you into the action. The Hitzville Show is currently one of the star attractions for enthusiasts and fans of great Motown Hits in Las Vegas. The Hitzville Show Vegas is open to audiences of all age groups and is great value for money as you will definitely be entertained.