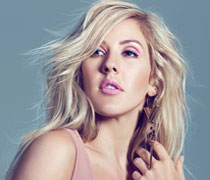 Ellie Goulding is a singer form England that is also a multi- instrumentalist that got her career started after meeting producer StarSmith and Jamie Lillywhite who became her manager a little after they met. She has been making a lot of steps in the music industry being one of a few musicians to top the BBC’s yearly Sound of… poll and the Critics’ choice award on the British award the same year. With her success in Europe Ellie has decided to perform for the Americans and she will be performing in Las Vegas....

This entertainer keeps in shape by running. She runs in marathons and has at one time gotten fans and friend from her Facebook to run with her as a form of promotion for her UK tour. She has run for many causes including for charity, medical awareness and socialist groups and movements. Running is not the only thing this star does to lend a helping hand to those who need it. She has done shows and performances for charity. This star has also done recording specifically for the purpose of helping the needy with the royalties that the production accumulates.

She has had an outstanding music career in England and the rest of Europe acquiring a few awards for her work. She has had many number ones on the British billboard and many other songs that were not number ones but they did their time in relevant spots in on the popular music charts. It has been approximately seven years now that this artist has been on the music seen and doing her thing, advancing her career and gaining well deserved fame for the work she has done to gain her status.

This star made her debut in 2010 and has seen and uninhibited rise to the top. She is now a star that is in demand and has a fan base that flock the venues when there is information about a tour or concert coming to their town or near it.

Ellie Goulding has many hits and her fans are looking to hear the best of the best that she has in her arsenal. Hits from her first album, Lights’ will be expected to get performed along with most if not all her billboard chart top songs. Her new hits and her soon to be released album are sure to have some place in her 2016 show in the Nevada dessert. The latest song from her soon to be released album Something in the way you move” is currently the last song released by this artist and it is already headlines. It is the first single released from her latest album Delirium.

She will be performing in the Mandalay Bay Events Center. This has been the venue for many an important NBA games, boxing matches, Ultimate fighting championship matches and other performances by well-known music acts such as the Spice girls. This venue is located on the famous Las Vegas strip and in a prime location. This venue has a seating capacity of twelve thousand so it is safe to say it is a very big venue. It is a place not unfamiliar with hosting a major event that could have the venue sold out.

This is a highly anticipated event. The tickets to this event are already been sold are will soon be sold out. With months still left to pass before the time for this event it is a common issue when it comes to this artist and her schedule performances.

This expected to be a big event with maybe a sold out arena mainly because this star has never performed on a stage this big in the United States of America before. It is a highly anticipated event with fans already buying their tickets in advance to keep themselves out the rush when the time for the event get closer. She will be performing all her great hits and the ones that have gained her the fame and love from her fans that she so humbly deserves. The tickets for the event are easily accessible and if the instruction on the Mandalay Bay Events Centre is followed correctly you should have your tickets in hand before the date of the concert.