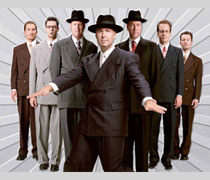 Big Bad Voodoo Daddy come to Las Vegas to celebrate the end of this year. Popular after more than 20 years from its debut in the music industry, the band has announced two 90-minute shows, on December 29, 2015 and December 30, 2015. The concerts will be hosted by the Orleans Showroom and are scheduled to begin at 7 PM, which promises a special show, for a holiday evening, right before the New Year’s Eve....

What is this show about?

Great American music meaning contemporary swing played by well-known artists and so much energy. All the members of Big Bad Voodoo Daddy are great musicians and they all will have their solo moments, many of their fans considering this parts as the best of the entire show. Besides doing good old music, they are also excellent entertainers, they know how to interact with the public and how to organize their show in order to provide 90 minutes of intense emotions and an unforgettable music. Most spectators agree that during the Big Bad Daddy they felt as going back in time, when big swing bands from the past were having their legendary live performances. This concert is about going back to the good old times of the swing with seven artists who have been performing together for about 24 years.

What spectators should expect from this concert?

If you have never seen the band performing live before, get ready for a one of a kind experience. Generally people dance during these concerts if they find a place to do it. The energy of the entire show is catchy and your toes will be tapping also because these musicians really know good music. For all the fans of the retro swing genre, definitely this concert is the right thing for a nice holiday evening. If you are familiar with the band and its members, then you should know that Big Bad Daddy Las Vegas concert provides the same quality music you have always experienced in the previous concerts. The band members are always involved in the show, giving everything on stage and creating a real connection between artists and their public. No wonder they are performing in about 150 concerts a year, all with good and very good reviews.

Where can I see these guys?

If you want to have a better idea about the band and its style, Big Bad Daddy have an official website where you can find information about their songs and inspiration. You can also look online for their performances in television shows. Their music has been used on numerous soundtracks for shows and series, including “The Wild, Despicable Me”, “Third Rock from the Sun”, “Phineas & Ferb”, “Ally McBeal”, and “So You Think You Can Dance”. They had impressive live appearances in “NBC’s Christmas in Rockefeller Center” and in “Dancing with the Stars”. Take a look over some of their most appreciated songs, which include “Go Daddy-O”, “You & Me & the Bottle Makes 3 Tonight (Baby)”, and “I Wan'na Be Like You”. Big Bad Daddy performed at the 1999 Super Bowl, during the half-time show, and at the 2006 Capital One Bowl.

Are they as seen on TV?

Most people say the band is better in live shows, as the spectators can feel the true energy coming from these artists, who really love what they’re doing. They have a complete show, full of interesting entertainment moments and people really feel involved in the performance. Not to mention that in most cases, the band members do a meet and greet after the show. So spectators can actually meet and take photos with their favorite artists, which definitely makes the experience greater than even the best live performance on television. The Orleans Showroom is also known for hosting these kind of moments after the show, so most probably this concerts are going to end in a friendly atmosphere.

What kind of instruments will they be using?

On the band’s official website there is an entire list with all the instruments used on each of the shows they perform, which includes also the Big Bad Daddy Las Vegas concert. The long list includes Earthworks high definition microphones, radial direct boxes, Crescent cymbals, a Taylor T3/B Semi-Hollow body guitar, a tenor saxophone, a piano, a clarinet, and an alto saxophone. The band members call themselves Yamaha performing artists, as most of their instruments are provided by this brand.

Who are the Big Bad Daddy members?

The band is associated with swing music, being one of the fewest groups in this niche to get an alternative radio hit and a gold record. Big Bad Daddy was formed by seven members: Scotty Morris, which is the lead vocals and a guitarist, Kurt Sodergren, who plays drums and percussion, Dirk Shumaker, for double bass and vocals, Andy Rowley, vocals and also playing the baritone saxophone, Glen "The Kid" Marhevka, who plays the trumpet, Karl Hunter, playing saxophones and clarinet, and Joshua Levy, who plays the piano and is also the band’s arranger. They perform together since 1989, but they became famous in 1996, when they had an appearance in the comedy film “Swingers” and some of the band’s songs were featured on the soundtrack also. Besides this film, the Big Bad Daddy appeared in “Night of the Living Doo”, a special episode in the series “Scooby-Doo”, and in an episode from the second season of “Party of Five”.

How many albums have they released?

Big Bad Voodoo Daddy has released nine studio albums, one live album and a single. Some of their most successful albums are “Americana Deluxe” (1998), “Save My Soul” (2003), “How Big Can You Get? The Music of Cab Calloway” (2009), and “It Feels Like Christmas Time” (2013). Their live album “Big Bad Daddy Live” containing a CD and a DVD set was released in 2004 and sold more than 2 million copies.

What about the Orleans Showroom?

The Orleans Showroom has 850 seats and is known as one of the best destinations for entertaining in Las Vegas, with excellent shows and small venues. Big Bad Daddy Las Vegas concert completes a list of great events organized in the showroom, among the performances of other famous artists, such as Natalie Cole, Dana Carvey, the Temptations, and Don Rickles. The seats are places in order to allow a good view of the stage for all the spectators. The sound is also great, according to the majority of the persons who have attended the shows hosted by the showroom.