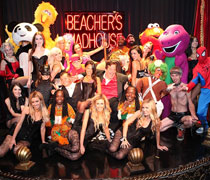 Everybody has their favorite Las Vegas show, which range from classic crooning performers, like Wayne Newton and Barry Manilow to full-blown theatrical extravaganzas like Cirque Du Soleil and various Broadway-style musicals. Those people who desire bawdy, no-holds barred fun with pure racey excitement know that the best spot in town for that is Beacher’s Madhouse. For 5 nights a week at the MGM Grand, that type of fun and excitement can be had in all of it’s flashy glory.

Just in the last month alone, the queen of scandal herself, Miley Cyrus has visited this fantastic and revised show and has given it her thumbs up. This quite honestly comes as no surprise because when you see the undeniably dynamite line-up at Beacher’s, you can understand that anybody who is looking for an unforgettable night will be there....

Say Hello to the “Little People”

Beacher’s Madhouse is a variety show which goes full-throttle and it is one which also delves deep within the pulse-pounding sounds of today’s greatest pop music and artist. The show proudly features “little people” acts like Mini Robin Thicke and Mini Miley Cyrus, which of course takes on a perfectly rendered recreation of the infamous VMA performance by the above two artist mentioned.

Also at Beacher’s, you will be able to enjoy the insanely tall “Amazon Ashley”, who is a renowned burlesque dancing queen, whose height runs at a whopping 6-foot-7. One of Amazon Ashley’s claims to fame is that she personally helped Miley Cyrus create and perfect her twerk dance.

She performed side-by-side with Miley on the VMA’s in which ultimately made the twerking dance world famous, along with infamous as well. Ashley also worked with Cyrus on her fantastic number one single dance video, “We Can’t Stop”, which was also behind propelling herself to notoriety. The two performers first met each other at the Beacher’s Madhouse in LA, of course located within the world famous Roosevelt Hotel.

Many consider the show the perfect blend of burlesque and freak show but when you learn about how many celebrities have made their way out to the Las Vegas strip show in the last decade, you know it’s the real deal.

The who’s-who of Hollywood like Leonardo DiCaprio, Johnny Depp, Demi Moore and even Bradley Cooper have been able to enjoy what this fantastic oddity of a show has to offer. Out of all the wonderful shows that Beacher’s performs, many of the celebrities have noted that “Beacher’s Babies” is the very best, featuring super-sexy burlesque dancers.

Inside this wonderfully chaotic show, you will discover flying performers and acts that will simply take your mind to another place. Another really cool thing at Beacher’s is that guests have a photo-room located directly under the DJ booth, where they have the ability to record their fun experience with photos that they can upload to their social media immediately.

It was 2002, in New York City, prior to Beacher’s big move to the Hard Rock Cafe in Las Vegas, where the oddity-filled, burlesque variety show had gotten it’s start. This is where the show’s very own creator, Jeff Beacher had hosted an astonishing five-straight years of consecutive sold-out shows.

A considerably peculiar but no doubt entertaining “battle of the bands” in which the show has slowly built-up acclaim over recent times is the duel between “Tiny Kiss” and “Mini Kiss”. These two fired-up and infinitely inspired bands love to battle it out as often as they can for their fans and for the right to call themselves the best Kiss impersonators.

Beacher’s Madhouse is highly regarded for its crowd-loving surprising twist, such as the always enjoyable animal guests, along with “the world’s youngest DJ”, DJ Babychino. So, anybody who steps foot into Beacher’s must always expect the unexpected and believe that they are viewing one of the greatest and most entertaining shows on earth.

Beacher himself has recently cited in an interview that he plans on elevating the Madhouse and all of the great live entertainment to an all-new high. You can tell that this is a man with a dream to create a different and truly unique live entertainment so that it can be enjoyed by those who look for more in their shows.

An entirely brand new performance space has been recently built by the MGM Grand Hotel and Casino, specifically for Beacher’s Madhouse. The new space provides multiple stages and it also houses a nightclub which is open all the way into the wee hours, 3 a.m. Beacher’s will take the stage 5 nights out of the week, with all of the shows beginning at 8 p.m. The various shows will be Monday-Sunday, plus there will also be late-night shows that will start around 10:30 p.m., which will be Thursday-Sunday.

The food served at Beacher’s Madhouse is absolutely out of this world, with dishes such as truffle linguini and half shell oysters, filet mignon and foie gras. You will always be able to find American classics like Hamburgers, chicken and waffles and mac and cheese as well, which then brings the menu together for all to enjoy.

When guests are dining, some of the performers will whirl past their tables and help provide a special type of ambience that they will never be able to find anywhere else. The cocktail program incorporated with the menu boast quintessential, one-of-a-kind beverages which are always hand-crafted by the utmost in skilled hands. The drinks served at Beacher's are quickly becoming noted for their exceptional and always impeccable taste and flair, with rave reviews coming from just about every type of drink critic.

Those who are considered some of the world’s very best mixologist show-off their skills at Beacher’s, creating not only an extravagant ambience but an extra flavorful time too. They mix-up drinks like “Trans-Jenner”, “Royal Scandal” and “Lil Johnson” with absolute care and know-how, plus they build on traditional drinks with the undeniably tasty “Tiny-Weeny Apple Martini’s”.

A Show You Won’t Forget

When all's said and done, if you love the peculiar, the interesting and sometimes the downright odd, blended in with bright lights and truly high-octane performances, Beacher's Madhouse is the place for you. Anytime that you find yourself in Las Vegas, the MGM Grand Casino gives a show you will simply never forget.