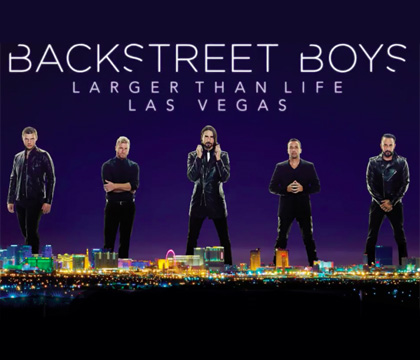 Backstreet Boys is a household name in many parts of the world. This globally famed American boy band is set to visit the city of Las Vegas later this year. Many of their fans who reside in Vegas are waiting on bated breath for concert, because, as every staunch Backstreet Boys fan knows, their concerts are nothing if not incredible. The members of the band are endowed with raw musical talent, and people are continually dumbfounded at the vocal prowess the members possess. The Backstreet Boys concert in Vegas is a must attend for anyone who wants to have an enjoyable and unforgettable experience.

A brief history about Backstreet Boys
The Backstreet Boys weren’t always famous, although the length of time over which they have held the enviable position of being superstars may make it seem like they always were. What the members have always had from a tender age is a lot of musical talent, which is certainly the greatest contributing factor to their fame. It all started with two friends, A J McLean and Howie D. who lived in Orlando, Florida. From a young age, it was rather obvious that the two possessed enormous musical talent. When they were young adults, they met Nick Carter, who was barely a teenager, through auditions. The three decided to form a trio, as they though that their voices were rather compatible.

The other two band members, Kevin Richardson and Brian Littrell, were born and raised in Lexington, Kentucky. The two are cousins, and in the early years of their lives, they sang in church. Later on, Richardson travelled to Orlando, to work at Walt Disney World, and he had to focus on his music at night. Richardson met the three other band members through a co- worker, and the four musical prodigies decided to form a band.

Over time, Lou Pearlman advertised in the Orlando Sentinel that he wanted to form a vocal band. McLean was the first member of the group to audition for Lou. Together with the other three members, they met Lou’s high standards and were chosen from countless other applicants for the group. The next day, Littrell flew from Kentucky to join the group at his cousin’s request. On 20th April 1993, Littrell officially joined the group, and that was the day the majestic group was born. They decided to call themselves the Backstreet Boys, as a reminder of a famous Backstreet market in Florida where teenagers loved to hang out.
The beginning was rather rough for the young band. Getting someone to sign them a record deal was not easy, and even harder was the mountainous task of building a huge fan base. So they started performing for crowds at every opportunity they got. They performed everywhere- from schools to malls to restaurants. Their first ever performance was at SeaWorld in Orlando, when Nick was only thirteen.

It was only a matter of time before the world started paying attention to this group of talented young boys. Once, they nearly signed a record deal with Mercury Records, but it was dropped at the last moment when one of Mercury’s longest recording artists threatened to leave if the label agreed to get involved with a boy band. In 1994, they finally got their breakthrough when they got signed to Zomba/ JIVE records. Their first songs were not instant hits, but their debut album was quite a different story.

Backstreet Boys Accomplishments
If you put yourself to the task of compiling a list of all the accomplishments that this band has achieved since its existence, you would be buried under tons and tons of information. This is because in the nearly two decades of the band’s existence, a lot of accomplishments have been achieved. However, there are a few outstanding achievements of the group that simply must be acknowledged. One such achievement is the fact that their debut album, which was also self- titled, became an instant global sensation soon after its release. It topped the charts not just in the U.S alone, but also in other countries, and especially in European countries. The band got such prestigious awards as the Durchstarter Award in Germany, and the platinum award in the U.S as it sold over one million copies.

Their second album was also a great success. But perhaps the group’s greatest accomplishment came with their third album, which was titled Millennium, and which was released in 1999. The hit single from this album, I want it that Way, topped the charts in a staggering 25 countries, and remained a global hit for quite some time. In fact, the album was the best- selling album in the United States in 1999, having sold nearly ten million copies. By this time, the band had reached an all-time high as far as popularity and fame were concerned. Nearly twenty years later, the band has not lost any of that fame, despite having gone through many challenges. Their music continues to transcend across generations.

Backstreet Boys Concert in Vegas
Although normally regarded as a boy band, the Backstreet Boys have time and again emphasized that they are more of a vocal band than the ordinary boy band. And one has to agree with them, because their vocals are certainly out of this world. To witness this, you simply have to attend the Backstreet Boys in Vegas concert. You can rest assured that it will surpass your expectations by far. Their concerts are usually energetic and thoroughly entertaining, and the band members truly know how to engage their audience. From pop music to dance music, you will be able to watch live performances of the numerous global hit songs that have been produced by this band.

In addition to the great live performances by this legendary band, you can also get the rare opportunity to interact with the members of this famous band. Despite the obvious fact that the band has scaled the heights of fame, you will be surprised to learn that the members are completely down- to- earth. Regardless of whether you attend the concert for the music or the interaction, satisfaction is guaranteed.

The Backstreet Boys in Vegas concert is simply a must attend for all Backstreet Boys fans. Judging from past Backstreet Boys concerts, this one is definitely going to be a great one. In any case, the band is in the habit of outdoing itself every time it performs live, and rest assured that the case will not be any different in Las Vegas..