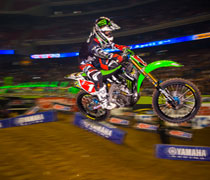 Every year, the best riders find a good spot, preferably a baseball or football stadium, modify the pitch to create a dirt track and then tweak it even further with obstacles and ramps. The stage is set, and the AMA Supercross Las Vegas is on. This is where motorbike racing dreams come true when you watch action packed and breathtaking races and stunts that will leave you gaping....

History of the sport

The AMA Supercross started as a spinoff to the Motocross championships. Back in 1972, Mike Goodwin, a race promoter and Terry Tiernan, the then president of the AMA envisioned the biggest motorbike racing event in the US, sort of like the “Super Bowl of Motocross”. Ever since the first event that year, the race has had widespread commercial success, and boy was it a start when 16-year old Marty Tripes won the cup. At the moment, the AMA Supercross Las Vegas is among the top motorsports in the United States, coming in second after NASCAR racing.

The first Supercross spawned several other similar events, with the term “Supercross” referring to its taking place inside a stadium rather than in the open. The AMA Supercross, however, is still the most prestigious and popular Supercross event in the US, not to mention the oldest. It has been held in various venues over the years since its inception, and some of the venues have been revisited several times. One of the most popular venues is the Sam Boyd Stadium which has been the location of more than a decade’s worth of annual AMA Supercross in Las Vegas events, ever since 1990.

The AMA (American Motorcyclist Association) is responsible for the governing of the AMA Supercross in Las Vegas, including making the rules and structuring of the event. It is anyway, the most prestigious cycle racing organization in the US. Responsible for the marketing, advertising and filming for the event is Monster Energy. They contribute to the team with their resources and expertise while at the same time scoring big points for themselves.

Only 3 winners are declared at the end of the event, one for the 450cc Class engine and two for the 250cc Class engine, one in the West Division and another in the East Division. Of course, the 450cc class, is considered more prestigious and riders are always anxious to acquire the title.

Unlike the Monster Jam which only takes a couple of days, the AMA Supercross in Las Vegas begins in January and extends into mid-May. Each time the riders meet, they participate in three races, two heat races and a consolation race for each class. Perhaps this is what makes the event longer.

This class consists of 17 rounds and each heat race is 8 laps. Both heat races have 20 riders and sometimes 21 depending on the number of qualifiers and the top nine of these qualify for the feature. The remaining riders have to compete in the consolation race, or the Last Chance Qualifier, which has 6 laps. Only the top two in this stage move forward into the feature to face the previous 9 who qualified. The feature race is 20 laps and this determines who emerges with the title.

Both divisions, East and West, have to go through 8 rounds each, with a single heat race being 6 laps. 20 riders, or sometimes 21, take part on either divisions, just like with the 450cc Class races, the top 9 in each division automatically qualify for the feature races. However, the Last Chance Qualifier in this category is 4 laps instead of 6, and the top two in each division avoid elimination. Those who make it into the feature race have to endure 15 laps on either division to find the winner. An East-West shootout is then held in May where the two divisions go head-to-head.

The AMA Supercross Las Vegas is concluded by the two divisions in the 250cc Class clash. There is no champion in this event, instead it is merely a competition for comparison. The top 20 from each division compete in a 15 lap heat event and the final 10 lap feature race.

Officials have the power to shorten the feature races if weather conditions become too severe to continue by reducing it to 10 and 15 laps for the 250cc and 450cc events respectively. Any of the races can be restarted if red-flagged within 3 laps from the start, if the race had already passed 3 laps, a staggered restart will be effected and the riders are lined up from the previous lap.

The Supercross is only gaining popularity as more global media attention is being directed at it, which has sparked several spinoffs in various forms. The Supercross became popular because unlike the Motocross which required a large open field, it could be held inside a stadium, close enough for the audience to feel the excitement. Now even smaller venues such as basketball and ice hockey stadiums are being used in Arenacross events, or AX in short. This makes it possible for the smallest towns to hold the event and get in on the action.

Make sure you don’t miss this coming year’s AMA Supercross in Las Vegas, I know you won’t want to miss it if you already saw this year’s events. It is quite simply the event of the year, miss it and miss out. Very few Events can match the excitement and the thrill of the AMA supercross and as such, it is definitely something you must do everything possible to attend.