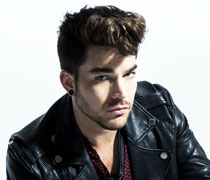 Adam Lambert is a singer-songwriter and former contestant of the national singing competition “American Idol.” Even though Adam was the runner-up for the season eight cycle of the show, he still continued to pursue his career in music. Shortly after his time on the reality competition, he released his first album, “For Your Entertainment.” The record achieved great success in the music industry, earning him a GRAMMY nomination for a song, ‘Whataya Want From Me’ from the album. In 2012, Adam continued to grow in his music career by becoming the first openly gay artist to have an album reach No. 1 on the Billboard 200. Adam then went on to release his third album in 2015, “The Original High,” as well as a fourth “Velvet,” which is set to be released March 20.

In addition to Adam's thriving solo career, he has also collaborated with the legendary band, Queen. Adam impresses members of the group through his rendition of 'Bohemian Rhapsody' as his audition for American Idol. Queen + Adam Lambert first made their appearance in 2011 and have since toured around the world. The group's success has led them to perform in multiple countries around the globe during 2020, including Australia, New Zealand, and Japan.

Shortly after his music career began, Adam was featured on numerous television shows and movies. He appeared as a guest judge on several competition shows, including "RuPaul's Drag Race," "Project Runway," and the "X-Factor." Adam has also featured in scripted television shows, including "Pretty Little Liars" and "Glee." In 2018 he had an uncredited cameo as a Truck Driver in the film "Bohemian Rhapsody."

What can you expect from Lambert Concert Tour in Las Vegas?

Adam Lamberts concerts are great, and you can expect everything to be amazing. There are however several things that you can be 100% sure they will be great. They include the following:

The concert will be tailored towards entertaining the audience. Adam Lambert will be showcasing his talent on stage by singing the “Ghost Town,” “Better Than I know myself,” “If I Had You”, and many more. Adam Lambert is a dancer, and he knows how to use the stage, involve his fans and keep the audience on its toes from the beginning of the show until the end. No wonder ladies are in love with him! You know, you can take a footage of the performance for remembrance or maybe take a selfie with the hot star to mark the event! Apart from his performance, the other opening acts will also bring to stage their performances to spice up the concert. Las Vegas attracts a young and vibrant group of fun seeking people and, therefore, the concert will be great.

The Adam Lambert’s Las Vegas concert will be great is expected to an enormous one. That means there will be at least a good number of opening acts that we are hopeful will be above standards. Different artists in support of Adam’s concert will warm the stage as he gets ready to perform a series of shows. You can be sure that you will not be bored and storm out of the concert before time because things did not go as expected. Also, it is safer to have an open mind because that will be an occasion that you will have the chance to see promising and talented artists perform live.

Adam Lambert has shown to be very committed to promoting his song albums, and that is the main reason he will be visiting Las Vegas. He is currently promoting his album, The Original High, amongst other and his fans will be lucky purchase them at a discount price. If you are a diehard fan of Lambert, then Hard Rock Hotel and Casino is the place to be on 5th December.

The Adam lambert’s Las Vegas previous tours have at all times been successful with less fracas and, therefore, there are minimal chances this coming one will be a flop. Furthermore, Hotel Hard Rock is popularly known for the excellent customer services and great reception they offer to their customers. You have no reason to worry about the efficiency of their services because the staffs hired for the concert will be highly functional. One good thing about the event is that the number of people who will attend the show will be manageable thus everyone will have a clear view of the performances during the entire time.

In every concert, you expect special performances from featured guests who make it complete. The Adam Lambert’s Las Vegas show will also have special bands and talented artists who will back up the tour concert. You can be positive that the event will not be a disappointment.

How to Ensure That Adam Lambert Concert Is a Success

Concert tours can be a little more expensive than what you imagine, and that is why it is important that you be aware if what it entails. Apart from reading this article, you can confirm the services that will be offered during the concert so that you can adequately plan for the event. No one likes to be inconvenienced especially when all the people around you are having fun. Getting detailed information will also allow you to make adjustments to your financial budget.

It is also advisable for you to be familiar with the city especially if it is your first time. You can check for the best places to spend your time while in Vegas through the internet or by the help of a friend. Getting such kind of information right will allow you to have more fun and more adventure without having to go through a lot of challenges.

It happens at times that you get a little out of control especially after you too excited. You have to make sure that you can observe the set rules and regulations to avoid getting trouble with the laws and probably putting your life or the lives of your friends at risk. There will be high security for the interest of all people, therefore, make sure you behave responsibly during and after the concert.

Las Vegas concert tours can never disappoint, and it is even better if it is a concert by Adam Lambert. You will have a tremendous time of your life. Get all psyched up for the December concert because it will be worth the money and time you have invested in it. Certainly you will have the chance to enjoy the performances, the services, and the serene environment during the Adam Lamberts Las Vegas Tour stop.